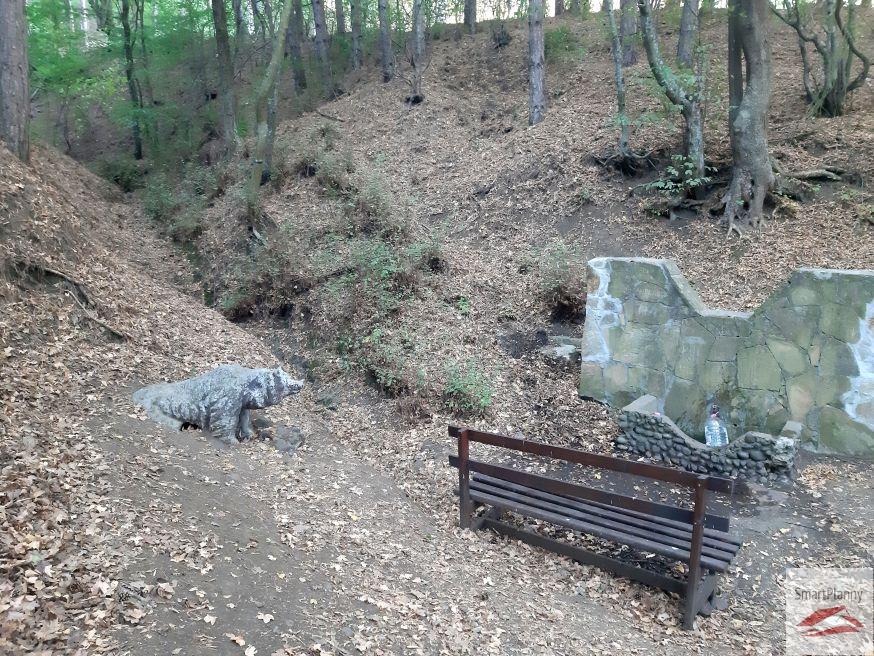 The Kaleto Eco-Trail is located on the northwestern outskirts of Obzor and is easily reached on foot from the town center.

It is a great opportunity to breathe the mountain air and take a walk in the woods if you want to diversify the emotions of the sea.

The eco-trail is light and well marked with information boards with the route and information about the sites along with it.

It has been known among the local people since ancient times and is associated with the healing properties of its springs.

The stages in the trail are well marked and at the end you reach the remains of a fortress wall of the medieval fortress Kozyak, called by the locals Kaleto.

Below is a map of the trail that shows the various attractions along the way.

An asphalt road can take you to the Gabara area, where you can leave your car.

From the very beginning, it makes the impression that the path has been renovated, seeing the wooden railings surrounding the road.

The first branch of the route is Ayazmoto Recreation Area, where you can take a breath and taste the healing water.

The place is associated with many legends about its healing properties.

There is evidence that it was used in Roman times.

Once upon a time there was a legal sacrifice here on May 21, the feast of St. St. Constantine and Helena.

There was a sign saying how many nutrients and minerals were in it.

A little further we reach perhaps the most popular photographed character from the trail – the stone bear guarding another fountain with healing water.

Water is known for its healing properties in the organs of movement, skin and immune system.

The presence of sulfur explains its slightly unpleasant odor.
The bear is located at the foot of the May Day meadow. It symbolizes maternal care.

The legend of the bear is associated with a girl who had an evil stepmother.

Every day she sent him to wash black wool at the spring until he bleached it. The girl prayed to God to help her and he told her to put on the wool and turned her into a bear.

The name of the meadow, as we can guess, comes from the celebration of May 1 on it.

The meadow itself is a vast area with built benches, swings and barbecues and a favorite place for rest and picnic.

We continue after the information board on the well-formed path.

Again wooden bridges and benches delight us in the cool grove.

Solar lighting lamps were impressive, for which we wondered how exactly they receive solar energy through the branches of trees.

We pass through an area called the Source of the fairies.

According to legend, the water from the spring flowed from the sad tears of the girl Kalina, who lived in the medieval fortress Kozyak and became a diva.

We keep to the right and reach a bench, from where to the left begins perhaps the steepest section of the entire route. The good thing is that it is short.

When the steep climb is over, we reach a path on which to go left and right, make a circle and pass the ruins of the fortress.

The Kozyak fortress was discovered by the Skorpil brothers.

In the 12th century, after the establishment of the Second Bulgarian State, small feudal castles were built in many places in Bulgaria, and the Kozyak fortress was also one of them.

The port of the fortress was well known as a trade center among sailors at that time.

It had double solid fortress walls, especially well fortified in the northeast and consisted of two parts with a total area of ​​15 acres.
The upper one was a hexagon and the lower one a trapezoid.

Remains of the fortress wall can currently be seen, and restoration of the medieval facility is planned.

The eco-trail had a lot of forks and intriguing paths to the side, but due to lack of time, we could not get a better look at the area.

A good reason to come back again in the future!

Another sea theme: What to expect from the new Bulgarian campings – Zora, Gardenia, Ailyaka, Shkorpilovtsi