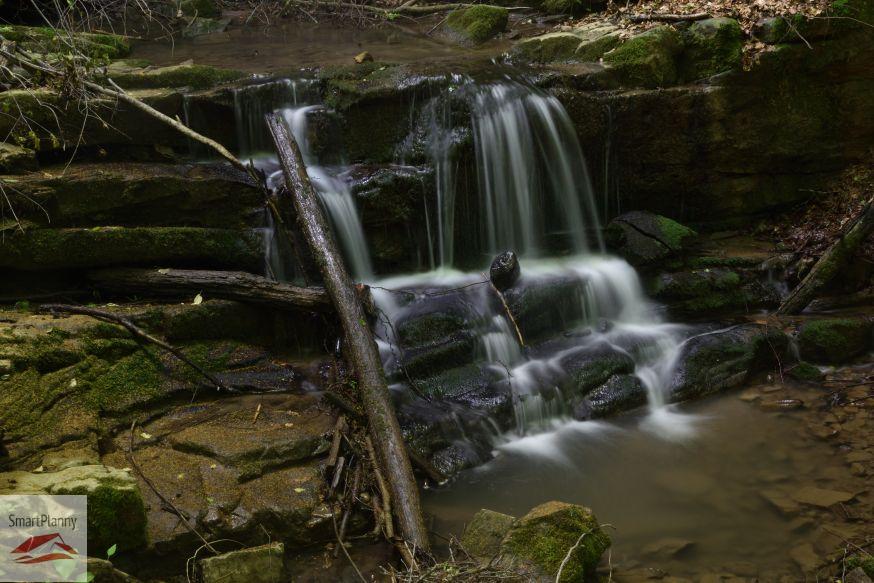 Pod Kamiko Eco Trail is a famous neighbor of the Vazova Eco Trail and no less charming than it.

It starts from the stadium at Bov Station and finishes with two high waterfalls near the village of Bov.

It is interesting that on the way the trail is accompanied by a cascade of many waterfalls along the Bovska River.

The trail takes about three hours on a leisurely walk, including photos and breaks. The good thing is that it is a circular route and you can enjoy different perspectives from the heavenly views around.

One thing is for sure, you will not be bored!

Beginning of the trail Pod Kamiko

Bov Station is located at the foot of the picturesque Iskar Gorge.

We started the march to Pod Kamiko at its non-traditional stadium – Skala Stadium. Its unambiguous name comes from the picturesque rocks among which it is woven. However, no footballers were playing on the lush meadow, but meekly grazing a flock of sheep and having lunch in the shadows of the majestic rocks around.

We walked along the stadium and started a smooth climb along the path.

The markings are white and green and unfortunately it was “here it is, here it is not”. In some places it was confusing where to go next and we lost it for a while several times. Dense bushes and lush greenery further aggravated the situation. Its poor maintenance, I guess, explains why there were no crowds of tourists on the road.

Not long after we reached a series of waterfalls along the river Bovska. We looked at them from the side as much as we could, avoiding carefully digging into the bushes around them in order not to encounter nasty creatures.

It was an advantage that the trail is not as commercial as its popular neighbor Vazova Eco-trail and we rarely met tourists. We enjoyed the peace and quiet of the forest and the murmur of the falling waters.

The wildflowers in the meadows pleased the eye with their colorful flowers and waved at us with their delicate bells.
Despite the great June heat, it was cool in the forest along the stream and we enjoyed the pleasant shady path.

And the recent heavy rains were the reason lemon-yellow chapel mushrooms were lined up like guards along the forest path.

We also respected the last small waterfall along the riverbed and approached the final destination.

Due to the abundant flora, we could not photograph the entire strong body of the Pod Kamiko waterfall from afar.
The stream of water was not very powerful and we were glad that we were able to see the natural landmark and its water extravaganza.

At its foot was a small whirlpool, where small groups of frogs and priest’s spoons clapped merrily.
The coolness of the canyon and the splashes of water were extremely fresh and invigorated our spirit.

To the left of Pod Kamiko is another smaller high waterfall. Moss mats were woven into its jets and softened the fall of the water.

Under the mighty crowns of several huge trees, we managed to reach its foot as much as we could and enjoy it.

The village of Bov and the way back

This was followed by a smooth ascent along a steep path to the village of Bov located on the plateau above the two waterfalls. We did not miss the rock formation The Fireplace, which had arrogantly straightened its chimney and looked around proudly.

We passed through the silent village and talked to a grandfather who was blissfully resting under a thick shadow.
We also saw the beginning of the fall of the high waterfall, which was quite modest against the background of its height.

From here there is an option to return to Bov Station on the asphalt road. However, we chose the forest route to enjoy a little more of the freshness of nature.

The next part of the route is not as picturesque as the first. There was a descent down a forest path, partly hidden in the woods, partly out onto the sultry lush meadows laden with flowers.

We refreshed ourselves at a fountain along the route against a background of trees with bizarre giant roots.

We reached a fence tied with a chain, which we passed after a short hesitation and carefully tied again.

The most beautiful part of the descent were the panoramic views of the surroundings. We saw in the distance the canyon with the two waterfalls and the village nestled above it and bathed in greenery.

We reached a second fountain and barn with four-legged friends, who peered curiously at the disturbers of their peace.

Last beautiful view from a more prominent site before diving into the woods again.

During the last part of the descent we lost the marking a bit, but in general there was no problem and we reached a place with a small chapel, gazebo and benches for relaxation.

One last big turn after the slope and we reached the final section, which was already on flat terrain and passed a few barely noticeable water falls.

The Pod Kamiko eco-trail is remarkable for its numerous waterfalls and its wonderful panorama.
Its natural charm, the freshness of the water, the close contact with the waterfalls were undoubtedly enchanting and make it an attractive place that I would gladly visit again.

Another interesting trail in the region: Lakatnishki rocks