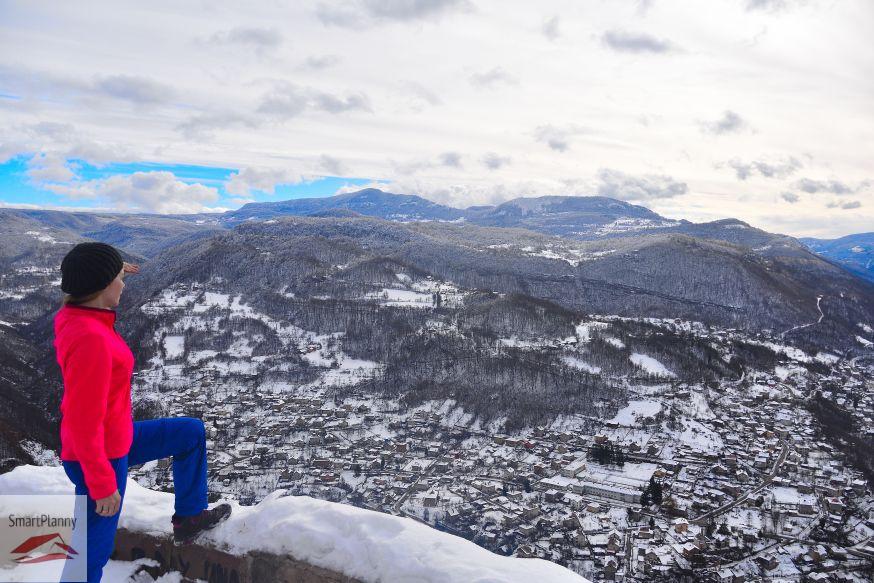 Lakatnishki rocks are among one of the most beautiful natural landmarks in Bulgaria and extremely popular among fans of rock climbing.

They are located in the Western Stara Planina, near Lakatnik station, in the Iskar gorge, 20 km from Svoge, where the beginning of our route began.

The final destination of our route was the Septemvriytsi monument, a large array of stone blocks and a five-pointed star.

The trail is one of my favorites and I visit it for the second time, with picturesque views of the curve of river Iskar in the shape of the elbow, hence the name of Lakatnik.

Benches, gazebos, panoramic levels, a remarkable rock crown, the Dark Hole Cave and the Razhishka Cave, the Eagle’s Nest Alpine Shelter, and the Zhitolub Karst Spring are among the most memorable stops along the way.

The route is circular and you will see different perspectives of the fabulous nature in the area.

Beginning of the trail at Lakatnishki rocks

After passing safely the turns at Svoge, where this time I failed to feel sick, we parked at the beginning of the path at Lakatnik station.

There is a small parking lot by the iron bridge over the river Iskar. On the other side, there is a restaurant with a small artificial lake. You can see the karst spring Zhitolub and a sign indicating the beginning of the route.

Here is the place to note that Lakatnik station is the village that was formed at the railway station and is different from the village of Lakatnik. It is located a little higher on the slope.

Karst spring Zhitolub was a magical surprise from the very beginning.

The spring is one of the largest karst in Bulgaria and was born of two underground rivers. They come from the lower levels of the Dark Hole cave, which is located above it, and merge at its base.

In heavy rains, 1200 liters per second pass through it!

We slowly started to climb the path under the beautiful Lakatnishki rocks, admiring the incredible views at every step.

There are several places with gazebos and benches where you can catch your breath at the steep start.

The Lakatnishki rocks are made of red limestone. As a result of the external relief-forming forces, bizarre rock forms have formed: caves, arches, ridges, towers, pyramids.

To the right of the trail, there is a visible turnoff to one of the interesting karst forms – the Dark Hole cave.

It consists of four floors and two main galleries. It is a complex complex of entrances, galleries, waterfalls, lakes and underground rivers.

It is 9000 m long, which ranks it first in length among the caves in the Balkan Mountains and fourth in Bulgaria.

The cave is the “school” of the Sofia cavers and continues to be explored at the moment.

It is curious with its remarkable fauna. It is not suitable for tourists and if you enter, be sure to do it with a guide.

We looked at the entrance to the cave and admired the crystal icicles at its gates.

We returned to the main path and continued climbing forward, dumbfounded by the unearthly beauty around.

From here you could clearly see the bend of the river Iskar, which with its interesting shape gave the name of the village.

We reached a small shelter on a small lawn, a barbecue area, and even a family of snowmen who welcomed us.

Here the path makes a sharp turn to the right.

The attraction of this place is the alpine shelter Eagle’s Nest. It is clearly visible from the railway line.

It can only be reached with alpine equipment, so we gave him a photoshoot without a personal visit.

As we climbed the hill, the village was already in our palm, nestled between the mighty slopes of Stara Planina.

There are views of the final destination – the communist monument and as a background two interesting oval broken rocks.

On the rock opposite the monument, there is a metal cross, reminiscent of all the climbers and mountaineers who died on the rocks.

Reaching a fork at Lakatnishki rocks

The next stage is to reach a spacious meadow with a pine forest and an information board.

There are two branches here. To the right is an orange marking with arrows and dots. It leads along a more picturesque route to the monument, passing through the Razhishka cave. To the left is a shorter, red marking that we used on the way back.

After the fork, we first reached an impressive rock arch, which stood out against the vast mountain slopes of the horizon.

The arch was lavishly decorated with icicles at the entrance.

We managed to catch a shot of the train, which announced its arrival in the silent valley from afar.

The next turnoff was to Razhishka Cave. It is located on the left of the path and is marked with a red wooden sign.

A short but steep climb followed. The cave is visible from the beginning of the branch. We tormented ourselves a little on the icy slopes, but we got to it without any problems.

Here we admired the fantastic rock formations up close.

The Razhishka cave has an extensive vestibule and is also called Suhata.

Archaeological research has shown that it was inhabited by humans during the Iron Age.

As I surveyed her impressive reception room, I heard a strange sound and saw a bat dozing blissfully in a dark alcove.

Before the monument, there was another protruding rock platform, which we reached on the way back. Here, too, the view combined with the interesting rock massifs was impressive.

End of the trail at Lakatnishki rocks

And so we reached the cherished finale – the Septemvriytsi monument.
It was built during socialism in memory of four people called septemvriytsi who died.

From it we enjoyed the final touches of the remarkable panorama to the valley of the river Iskar.

Lakatnishki rocks is an attractive destination 1.5 hours from Sofia. The path that winds around them is relatively easy to conquer. In addition to the breathtaking views, bonus are the interesting karst forms, rock, and water natural creations along the way.