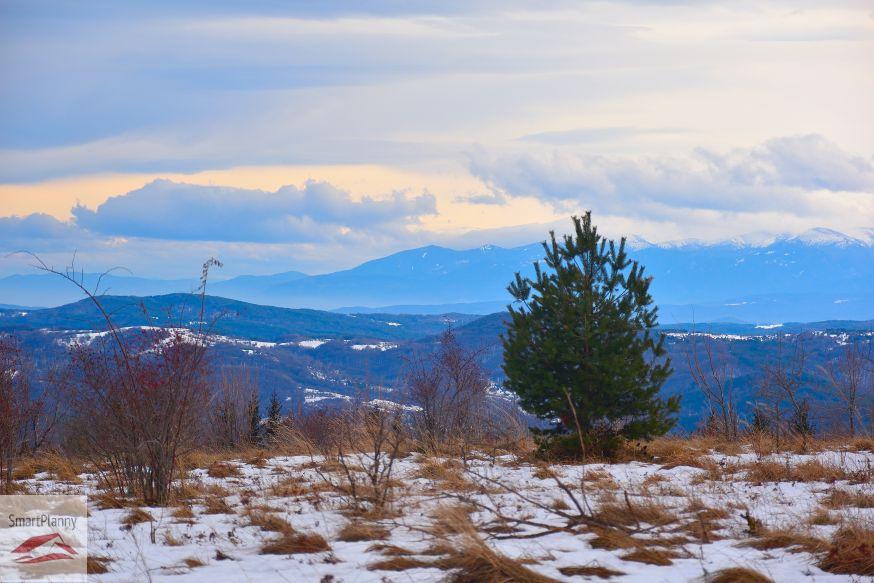 The transition from the village of Bistritsa to the Pogledets hut on Vitosha is a different variant from the usual and well-known trails in the nearest mountain to Sofia.

If you are looking for a destination for a walk near the big city, with enough displacement to do good sports activity and escape from the crowds of Vitosha, this is your place.

Alternatively we recommend that you continue to Aleko, which is 7.7 km in total.

Beginning of the trail to Pogledets hut

We started our trail from the outskirts of the village of Bistritsa, just before the foot of Vitosha.

Between the big modern houses built here, we found a quiet place to park. There is a reason why the village has established itself as an expensive luxury villa area. It is the oldest settlement at the foot of Vitosha Mountain and the largest of all.

According to the legend, when the Sofia field was a lake, there were only three villages around it – Yana, Boyana, and the old village of Bistritsa. Their founders were 3 sisters – Bistra, Yana, and Boyana. They were royal daughters and their father built a palace for each of them. He chose the most private places for them. When they got married, their servants stayed to live there and so the villages were born.

The grandmothers of Bistritsa are the most famous women from Bistritsa, famous for their performances of archaic folklore and unique polyphonic singing all over the world. They are included in the UNESCO list of intangible cultural heritage.

From the very beginning, there was a small charming waterfall on the Bistrishka River, which set a very fresh start to the destination.

We enjoyed the raging water jets and crossed the wooden bridge forward to the goal.

The path at the beginning is quite wide and the displacement started almost immediately.

Advancing along the challenging ridge of Vitosha we came across several obstacles.

In many places there were fallen pines that looked like they had been knocked down by storms.

Where above, where below, we overcame them without a problem in the spirit of Tarzan.

Gradually, a lot of snow appeared on the trail and the climb became a little harder. On my return it was a great adventure here.

In the middle of the path to Pogledets hut

The more interesting part of the route was the area called Katunishte, which was a vast pasture covered with low bushes and offered a beautiful view of Plana and Rila.

We were a little late with the departure and the sun’s rays were getting harder and harder to sneak behind the silhouette of Vitosha.

End of the trail to Pogledets hut

Above Bistritsa is located the nature park “Bistrishko Branishte” – one of the first reserves in Bulgaria, declared a protected area. It preserves centuries-old spruce forests, grasslands, rock formations and rocky rivers.

At one point, a winter marking with poles and a blue marking on the trees finally appeared.

Unfortunately, Pogledets hut did not work, but a noisy company was rejoicing in front of her and their joyful cries echoed the silent winter picture around.

The transition from the village of Bistritsa to Pogledets hut is a pleasant trail, different from the commercial routes of Vitosha, offers a pinch of adrenaline with its displacement and pleasing to the eye with beautiful views to the southeast of the mountain.

Suggestions for other routes on Vitosha: here