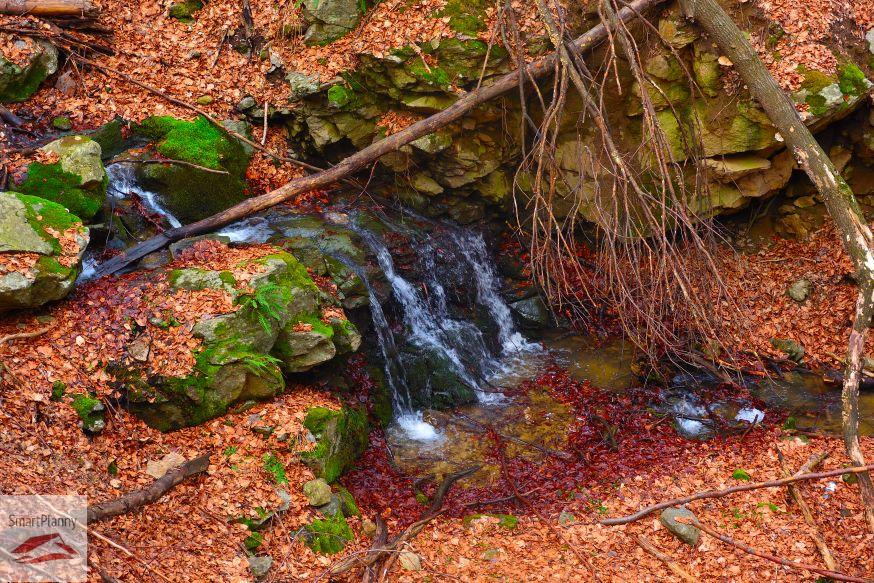 The route from the village of Dolni Pasarel to Peyova Buka hut is a pleasant excursion among the thickets of Plana Mountain, garnished with a small waterfall and wonderful panoramic and forest views.

There are several options for a route from the village to the hut, three of them start on steep paths in the forest, and another three are on sloping dirt roads. The most convenient is the beginning from the village of Dolni Pasarel.

How to get to Peyova Buka hut?

The starting point is the bridge near the village of Dolni Pasarel, 50 minutes from Sofia.

The village of Dolni Pasarel is located in the Pancharevo gorge formed by the river Iskar. It is located on the slopes of both Plana and Lozen mountain, which is part of Sredna Gora. The gorge separates Plana and Vitosha from Sredna Gora.

Peyova Buka hut is the only hut on the land of the village of Dolni Pasarel.

The path we chose started off the road and is steep at the beginning. We were careful about the oncoming cars, as there is not much visibility from the nearby turn.

After a breathtaking start, a pleasant stretch of the deciduous forest began.

The surprise was the good markings on the road (blue, white and red) and the numerous yellow signs for Peyova Buka hut, which were literally at every step.

There is a small waterfall, fortunately, alive and wild through February, when we took the walk.

In this part and in general, for most of the route, the road is wide and spacious.

There were several shorter alternate sections through the woods, where part of our group slipped away and rushed to explore with enthusiasm.

The heart of the route to Peyova Buka hut

The most interesting part for me was the high part of the ridge, where a wide horizon to several mountains is revealed – Rila, Stara Planina, Lozen mountain / Sredna gora.

We could not miss the shiny mirror surface of Iskar Dam.

This is the largest and second largest dam in Bulgaria. At the time it was built, it was the largest technical facility in the country.

In addition to the mosaic of mountain peaks on the horizon, the scarlet shrubs of the rose bushes complemented the colorful forest palette of colors.

After the ridge, the trail continued to meander through the magnificent deciduous forest of Plana.

There were for variety, areas of birches, and someone had played with their delicate stems.

And so imperceptibly, we reached the area around Peyova Buka hut.

Like no one else, tourists suddenly crawled in from several directions, including a group of motorcycles, who roared with their mighty roars.

Peyova buka hut is named after a century-old beech, which is located near it. Interestingly, there is a spring at its foot.

The beech was also adorned with wood mushrooms, which were stunned by all the attention poured on them.

One of the tourists we met was leaning on a beech tree and gathering energy from it.

Each tree radiates energy and beech, along with oak, birch, and pine are some of the most healing. It is especially useful for your harmony and mental balance if you embrace the tree and exchange energy with it!

Peyova Buka hut was built by the local hunting party. The altitude we climbed was 1187m. There are also 2 other shelters next door.

We took advantage of the tables and benches in front of the hut and duly celebrated the end of this wonderful walk.

The path from the village of Dolni Pasarel to Peyova Buka hut is a great opportunity to jump near Sofia and wander through the forest thickets of Plana Mountain without much physical exertion.

The views from above are amazing and you see not one, but several mountains in the palm of your hand. Have a nice walk!