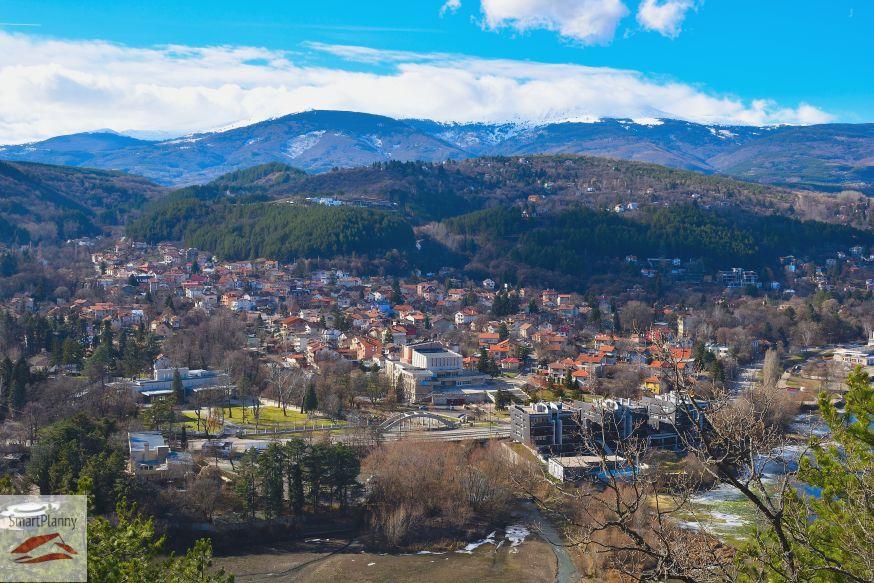 The panoramic path of Pancharevo – we have walked many times in this direction, but for the first time, we have it now discovered.

Beginning of the panoramic path of Pancharevo

Our route started from the parking lot in front of the wall of Pancharevo dam. There are actually two parking lots on either side of the road.

Another option is to access the dam wall from the parking lot in the village of German.

Before and after the dam wall there were several stalls with mineral water and nuts.

The walk along the wall was magnificent. Wind in the hair …. Stunning views of the turquoise waters of the lake and the green skirts of Lozen Mountain, Plana and Vitosha. Beauty!

After passing the parking lot from the village of German, we headed to the panoramic path of Pancharevo. We turned left on a forest path in the forest.

The trail is relatively narrow at times, and although there were tourists coming from the opposite direction, we passed without a problem.

There was even a slight adrenaline rush in the face of a fallen tree on the road.

After about 15 minutes we turned right on a path going down. There was a yellow sign for Kokalyane hydroelectric power plant as a landmark.

Romantic sketches of the incredible landscape around Pancharevo Lake crept between the branches of the trees.

The calm water surface shone like a polished gem against the sloping mountain slopes.

Through the fluffy pine branches you could see the modern houses and villas of Pancharevo, perched on the opposite hill.

Observation deck on the panoramic path of Pancharevo

In the middle of the trail was a panoramic playground built by volunteers.

We admired the amazing panorama around the Pancharevo gorge. The bridge of Pancharevo gave a modernist touch to the beautiful pastoral picture. Cherni Vrah shrouded in clouds waited for its moment to wave at us from the horizon again.

The area around the lake combines in an unforgettable landscape the charms of the water mirror and the mountain slopes.

A huge snow-white cross stood proudly on the steep slope around the site.

Shortly after the site there was a short section with a slightly steeper displacement leading to a hut in the woods. After it we started the descent smoothly, reaching the end of the panoramic path of Pancharevo – hydroelectric power plant Kokalyane.

There were several parking lots next to it, so from here it is also an option to attack the path in the opposite direction.

Return on the asphalt road under the panoramic path of Pancharevo

For a change, we made the route circular and returned to the asphalt road winding along the lake.

It wasn’t long before we reached the stands, dotted with relaxing people, thirsty for views in the unusually warm January weather.

The asphalt road is extremely commercial. Get ready to walk in a crowd almost all the time. We wondered if we were on Vitoshka or 12 km from Sofia?

The final touches of this unforgettable walk were the kayaks floating on the smooth surface of the lake.

Instead of a conclusion

The panoramic path of Pancharevo is an invaluable find one hand away from the big city. In addition to the beautiful nature, the area around the lake offers opportunities for all kinds of sports, fishing, picnics, spa treatments and numerous restaurants. Undoubtedly one of the jewels of Sofia!

More ideas for routes in the region: here