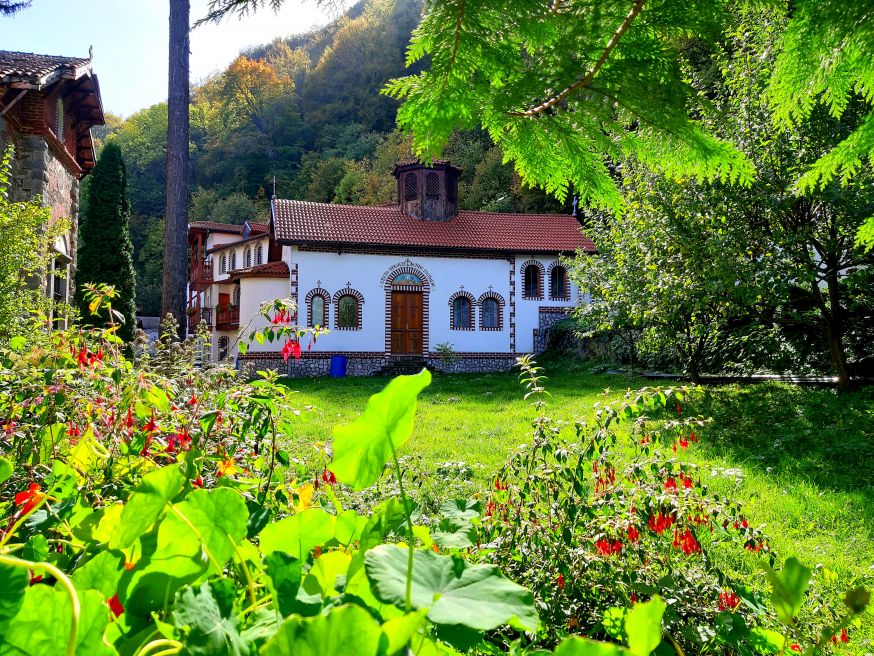 The walk from the called loud Devil’s Bridge on the river Vedena to the Kokalyanski Monastery is relaxing, pleasant, and very colorful through the window of the October colors.

The trail is suitable for families with children and rewards with pleasant views of the valley of the road and the paradise garden of the monastery.

Beginning of the path to the Kokalian Monastery

The Devil’s Bridge on the river Vedena is located 30 minutes from the center of Sofia.

We skillfully avoided the traffic jam at the crossroads for Pancharevo on the surrounding streets of the Gorublyane neighborhood.

Reaching the location, we parked in a small parking lot off the road.

The beginning was well marked.

According to legend, here was the drawbridge and the secret road to access the fortress Urvich, which was handed over by a woman named Vedena to the Turks.

God then petrified Vedena, and if you looked up from the bridge up the river valley, you could see the petrified figure on the right bank.

I did not see a petrified woman, but I was fascinated by the splendor of the multicolored October colors.

At the foot of the path, there were three signs for the Kokalyanski Monastery.
The marking is red.

In the beginning, there was a steeper climb.

As I took a breath on the rocky slope, I could not look away from the valley of the Iskar River and the enchanting panorama of the Plana around.

Interestingly, Plana was considered part of Vitosha until the Shkorpil brothers separated it into a separate mountain.

For the most part, the trail is winding and nestled in the deciduous forest.

After the abrupt start, it is time for a smooth transition and a quiet walk in the silent forest.

Forest silence …. as far as they are not heard from time to time, the children’s cries from the merry groups on the path.

Then comes the galaxy of mini mushrooms perched on a moss-covered stone.

The area of the Kokalyanski Monastery is famous for the surrounding oaks.

This is the sacred tree of the Slavs, used as a place of prayer where there were no temples.

Hence its name as “cross tree“.

The Kokalyanski Monastery was built in the 11th century, during the reign of King Samuel.

According to the legend, while hunting in Plana, Samuel killed a deer, which shed large tears before he died.

Touched by this event, the king ordered a monastery to be built in this place in honor of St. Archangel Michael.

Burned and looted during the Ottoman rule, the monastery is now restored and enjoys its neat buildings.

Entering through the gate, I gasped from the paradise garden of the church cloister.

As a hobby gardener, I spent a long time among the flower saplings of the sunlit yard.

The temple building was behind the majestic postures of several pine trees.

The interior was being renovated and some of the icons were being refreshed.

Another of the monastery buildings also impressed us a lot with its pleasant facade.

The fabulous path to the Kokalyanski Monastery is a great offer for a walk on the outskirts of Sofia.

Apart from the pleasant views, the easy route has a wonderful end at the monastery and its magnificent garden.

Other eco-trails in region of Sofia city: here.