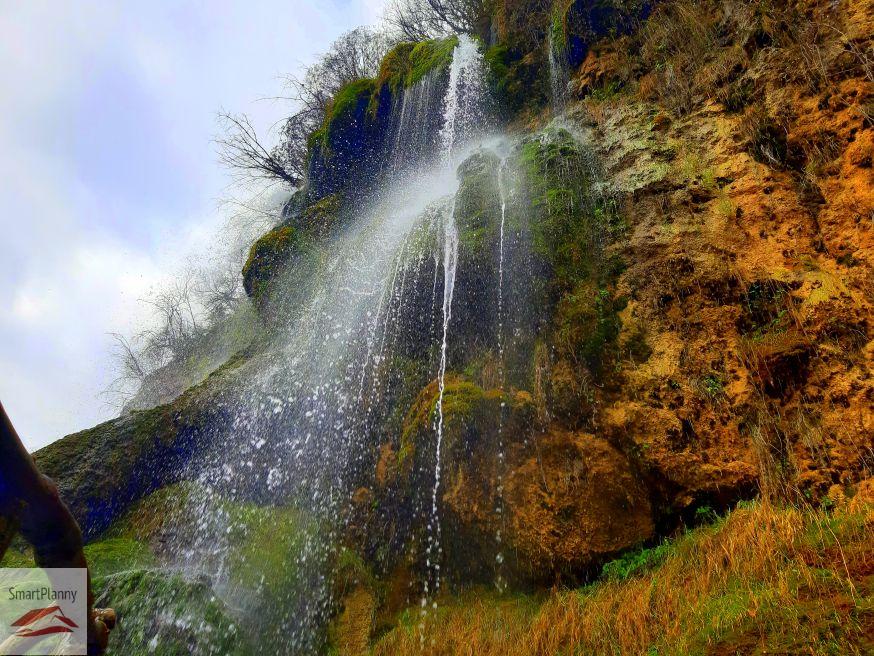 The walk to the Polska Skakavitsa waterfall offers a unique experience – passing BEHIND the curtain of the waterfall from behind.

How to get to the Polska skakavitsa waterfall?

Polska skakavitsa waterfall is located near the village of Polska skakavitsa, Kyustendil municipality. The displacement to its highest point is about 70 m, and the main drop is 53 m.

Polska skakavitsa waterfall is also interesting in the fact that instead of decreasing, it adds to its size because of the river waters enriched with calcium carbonate. It is active all year round.

From Sofia, the beginning of the eco-trail can be reached by car in about 2 hours.

The path to the waterfall is easy and passes in one breath. It offers a very nice view of the surroundings around the waterfall. It is well marked and you have nowhere to go wrong.

We parked in a wide place in front of the neighborhood and reached the beginning of the eco-trail. There were a guest house and a pub, and perhaps the pub was open in another season.

Since the eco-trail has several different circles, I will offer you a route along which you can see the sites in ascending culmination and not miss anything.

After a few meters along the eco-trail you reach the first crossroads.

From there, I recommend that you turn right, go through the private yard of a house (I know it sounds strange), then on a bridge and reach the church of St. Dimitar, which is located on the upper level of the waterfall.

The owners of the house were there as we passed, we greeted and there was no problem reaching the church.

The river that feeds the waterfall is Golemi (Shiroki) dol, a right tributary of the river Struma and despite its loud name, perhaps because of the season it was more like a small river. It amazes us how it forms such a powerful waterfall.

The Church of St. Dimitar is nestled in this amazing place where the fall of the waterfall begins.

The temple is built on the foundations of an older medieval church.
It was closed, but even its building was interesting in combination with its location.

It is made in several circles and as far as we could find our way from the map, it can be a more external circle from the beginning of the eco-trail at the neighborhood.

The walk along the eco-trail was very pleasant and enjoyed wonderful views of the surrounding area and the waterfall in the distance.

A small deviation before you reach the waterfall is the turnoff for the viewing platform Draganova Skala. There is a table, benches and barbecue facilities.

As you eat, the Polska skakavitsa waterfall poses in front of you with all its splendor.

We returned to the eco-trail and before turning right to the waterfall on a bridge, we continued forward and went to a small meadow, where there was also a nice long-term view of the waterfall.

The meadow is located on the path if you come to the waterfall by train and travel to Skakavitsa station.

We returned and continued on the bridge. There was a sign with the cult name for Bulgaria “Devil’s Bridge“, which cheered us up.

At the Polska skakavitsa waterfall

This was followed by a short climb up the wooden stairs built around the eco-trail.

We reached the lower level 1 of the waterfall.

This is probably the most intriguing level, because you can go behind the veil of the waterfall and have an unforgettable view through the water curtain.

The rocks at the foot of the falling water were clad in green robes and enjoyed the grandeur of the elements pouring on them.

We passed behind the water curtain. The place is hidden between several rocks and the feeling is that you are watching an unusual torrent through the window of a huddled house.

On the side of the waterfall there is a small cave, from where the fabulous extravaganza continued.

Prepare appropriate clothing, unless you intend to snuggle under the water jet, which is an amazing experience in the summer.

Amazed by what we saw, we continued to a protruding panoramic site between levels 1 and 2, from where we enjoyed the beautiful fall and the church of St. Dimitar overlooking the horizon.

We reached the crossroads, where there was a sign indicating level 2. From here we later returned to the beginning on a path in the woods, not on the detour eco-trail.

Level 2 offered a wonderful view of the water string of garlands up close and the beautiful rocks behind them.
Their unusual color is due to the greenish-porous limestone / travertine /.

We got wet here too, it’s part of the pleasure to visit a waterfall.

We returned to the crossroads with the signs I mentioned above and took a path in the woods. The transition did not disappoint with the interesting rock formations that silently watched us.

And here, oh surprise! Another cave, neatly shaped with wooden stumps. There was even a chimney (an opening at the top of the rock)!
Some of the rock niches are said to have been inhabited by monks, including St. Joan Rilski.

Last but not least, the fertile Kyustendil region gave us amazing apples that we picked along the way and made my favorite apple pie. Part of the presentation was the fragrant rosehip tea, which was also collected along the route. Hmmm ..

The transition to the Polska Skakavitsa waterfall is an incredible pleasure, due to the unique natural formation, the views around and a well-formed easy route.