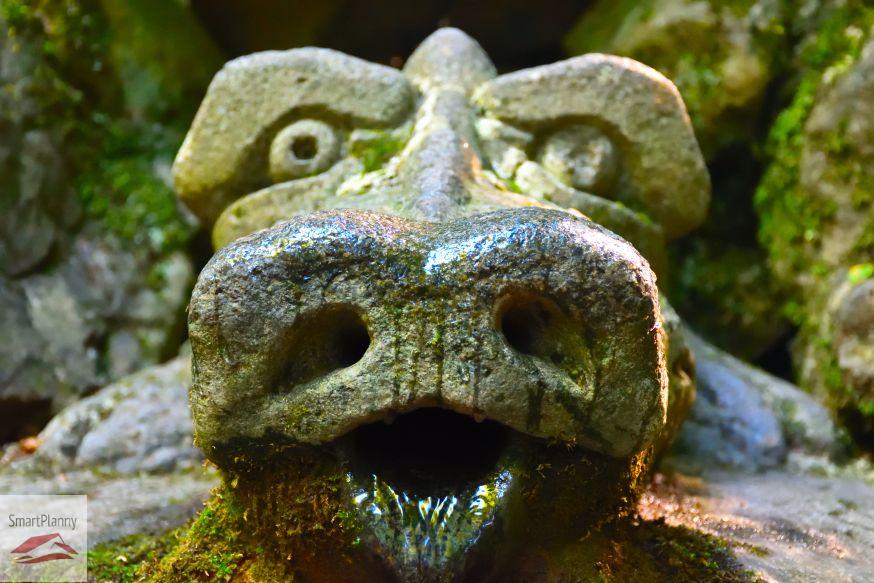 The route to the Source of Living Water took us to the village of Bosnek, in the southern and less commercial part of Vitosha. The route is easy and preferred by families with children. At the end there is a spring with a sculpted granite dragon’s head and a cave of the same name: Living Water.
It passes in one breath, on almost flat terrain. There are excellent markings, rest areas and signposts for the area.

About Bosnek and the Alley of the Bosnек Karst

The village of Bosnek or “Lung of Pernik” is located about an hour from Sofia. It was founded by Serbian settlers called Bosniaks, hence its name.
Nearby is the longest (over 18 km) and one of the most beautiful caves in Bulgaria – Duhlata, whose galleries are located on six levels. Unfortunately it is not open to visitors.
The source of the Living Water is a siphon / karst spring and is nourished by cracked waters. The water collects in a cavity underground and when it is filled, it is poured on the surface.
Unlike the heavily visited northern slopes of Vitosha, to the south, the mountain enjoys the habitat of a variety of wildlife that find refuge in the karst region of Bosnek.
The hairy oak is specific for the region. To the west of the village, on the road to the town of Pernik, is the Six-Century Oak.
In the vicinity is the only known nest of a bald eagle in Vitosha Park, one of the largest birds in Bulgaria.

Beginning of the path to the Source of Living Water, Bosnek

We entered the village of Bosnek and turned left past a house where the Living Water was written in red letters.
We parked on a small village square, which at 11 o’clock was already occupied by many eager to visit the landmark tourists. From here we pass several more village houses before reaching the dirt road leading to the spring.

Surprise, here’s where we can buy honey! From Pchelin Bosnek, whose owners enterprisingly advertise their goods on the tourist flow.

After we set foot on the dirt road, there was a large spacious meadow, as a kind of the beginning of the route. Meadows and pastures are distinctive for this area, developed on the site of former oak and beech forests.

This is my second visit to the route and it is clear that a lot has been done in a few years to improve it. There were many signs with detailed information about the history, flora, and fauna of the area.

I ate cornel cherries, diversifying the thick overhanging branches of the trees with their cheerful red flames. And I replenished my rosehip supplies for my favorite tea!

The marking is red and white, black and white and has high marking stakes with numbers. At number 45 we turned right and entered the deciduous forest.

After about 10 minutes we reached the destination of the trip – the karst pulsating spring of the Living Water. The shelter and the surrounding benches were already occupied by hungry tourists.

At the source of the Living Water

And here is the photogenic head of the dragon-guardian of the spring. An icy-cold mountain stream poured from his gaping mouth, and the children screamed and shouted at the otherwise dramatically silent forest.

We caught up with the sandwiches and followed the shelter along the path up the slope. After about 100 m, we reached the Living Water Cave. It was crowned with a plaque by the Bulgarians from Farm 2 with an inscription dedicated to the first solitude of St. Ivan Rilski at this place. The vestibule of the cave was small and an icon of the Holy Mother of God shone from the darkness.

The cave has an independent karst system, independent of the Struma River. Water passes through it and comes to the surface through the pulsating source of Living Water.

On the way back down, something blue flashed in the rocks. We moved away from the path and saw another small spring decorated with several icons. The green moss, the centuries-old oaks, the light murmur of the water contributed to the magical feeling.

The path to the Source of Living Water, Bosnek is a great destination, close to Sofia, easy as a route and with a surprising fairytale detail of the finish.


Other eco-trails in the region:

The magic of the Tran gorge on the river Erma