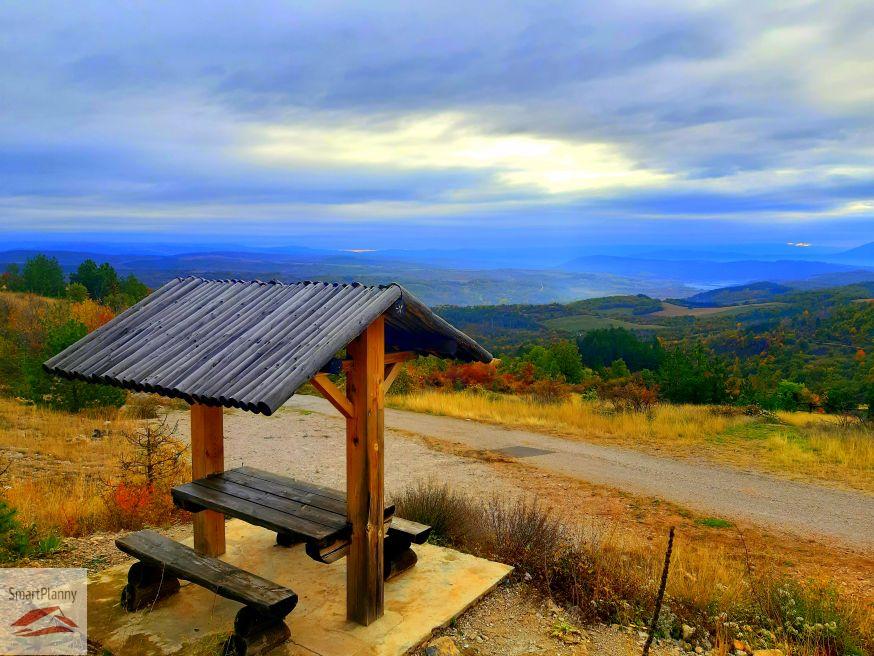 The eco-trail “Looking at Nine Mountains” is an incredible opportunity with a relatively easy route to see not several, but nine mountains at once.

In addition to the fabulous panorama in all directions, the trail offers solitude to a small temple, an unusual attraction in the form of a mosaic “Eye”, shelter, gazebos, and benches at every turn.

Beginning of the Ecopath “Looking at Nine Mountains”

The road from Sofia to the village of Sirishtnik, Pernik region is about an hour.

Then we parked at the starting point – a small square at the end of the village. It is something like a U-shaped junction.

There was an information board and an arrow to the right.

From there, a steep climb began along a narrow asphalt road.
In general, there is asphalt on half of the route.

The path winds past the last houses of the village and the cemetery.

We attacked the route relatively early, so most of my photos are pigeon-gray in the morning mist.

Eh, that’s cool. We found fallen walnuts and quinces and gathered strength for the route.

After the steep climb, we reached an asphalt road, where we turned left.

This is the only place where you can wonder where to go because there is no sign.

Apparently, we had gained height, because behind the bushes, with our mouths open, we noted the first panoramic views and a serious request for what we would see above.

We reached the chapel of St. Nicholas the Wonderworker, which was like coming out of the tale of Hansel and Gretel.

Next to it, there is a small fountain, sheds, and many benches for relaxation.

Probably a lot of people gather here in the summer.

We started the new stage – climbing the iconic trails “Looking at Nine Mountains” stairs up the hill.

They’ve seen better days, too, so be careful not to go wrong.

The new point for photos and a breath of fresh air is the “Eye” Terrain Mosaic.

It has the interesting concept of leaving a stone by passing from there and thus forming a kind of picture. How!

In the middle of the route – “Looking at Nine Mountains”

We went out again on an asphalt road and there was the gazebo key for the route, marking the next stage of the route.

We met a photographer who was obviously chasing dawn poses.

There were no other enthusiasts here at this early hour of the weekend.

And the colors around are amazing.

A bush in a shade of carmine could not escape the lens.

We looked at the mountains and enjoyed the silence.

The center of the idyll was Pchelina Dam, which is the crystal heart of this mind-boggling sight.

End of the trail “Looking at Nine Mountains”

We reached the last part – the shelter with the rhetorical name Pogledets ( Viewer).

Of course, we respected the monitoring platform.

And the big final was after a few meters, where the peak with the unpronounceable name Sirishtishka Rudina (1,172 m) was waiting for us.

This was followed by climbing the ladder with the flag, well-deserved rest, and exploring the mountains of the newly discovered front: Black forest, Vitosha, Verila, Golo Bardo, Rila, Pirin, Konyovska, Zemenska, and Penkyovska mountains.

I think I need to refresh the geography of the area.

Pchelina Dam and the chapel of St. Yoan Letni

After looking at the Pchelina dam from above all the time, we decided that we couldn’t stop ourselves but go down to it as well.

In the past, it was called Lobosh.

The road to the cult chapel for photographers Chapel of St. Yoan Letni on the shore of the dam was dirt and not very suitable for cars.

The small church is located in the former land of the village of Pchelintsi flooded by the waters of the Pchelina dam.

We took a nice walk along the coast and made a wonderful bouquet of sunflowers.

The road meandered theatrically on the horizon to the temple, perched on impressive cliffs.

Abandoned in complete destruction during communism, the church was renovated in 2008, but the icons need further restoration.

We looked with interest at this magical place, inhabited since ancient times, and felt its appeal.

The eco-trail “Looking at Nine Mountains” is impressive with the unforgettable horizons of all countries, its spectacular sites, and the relatively easy route.