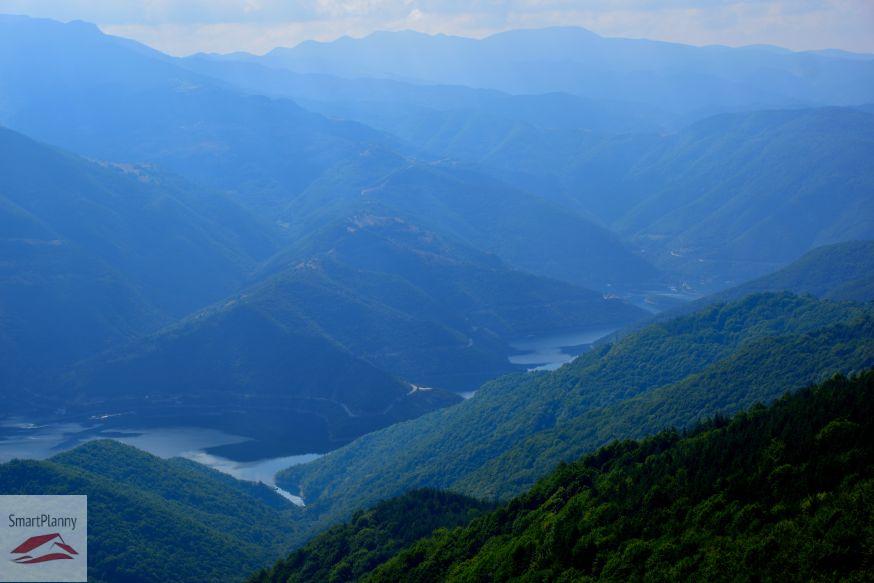 Bekovi rocks is a panoramic site located about 45 minutes walk from the outskirts of the village of Ravnogor, which reveals an amazing view of the lake Vacha and its surroundings.

The path winds along an old Roman road and reaches a shelter with benches, where in the past a Thracian sanctuary stood.

The village of Ravnogor is located in the Rhodopes, Bratsigovo municipality, Pazardzhik district. The village is known for the cleanest air in the Balkans (according to a NASA study).

The beginning of the hike to Bekovi rocks

The road to the village of Ravnogor is quite challenging in view of the endless turns on the steep route. The good thing is that it is not very commercial and relatively quiet.

Wandering along the serpentines and struggling with my fragile vestibular apparatus, I noticed a group of cyclists, very young boys, struggling heroically with the slope.

The final point to reach by car was at the end of the village, where the road turned black and we took a position to the last house in the village.

Here is the place to note that already here I noticed a sign for grill and beer “Bekovi rocks”, but I decided that it was some abandoned entrepreneurial activity.

It was possible to continue on by car, and later we saw brave people to advance on the rocky terrain.
In general, there is nowhere to go wrong, the road is wide and spacious and in several key places there are signs where to continue.

The weather was wonderful and we enjoyed the beautiful panorama of the majestic Rhodope massif.

We reached soon a fountain, which can also be a kind of parking space.

After about 10-15 minutes there was another suitable place to rest. There was a sign for the other landmark nearby: Red Rock, but since it was in the other direction, we couldn’t do it because of our busy scheduling schedule for both in one day. We still had to leave something for the next time.

Here was also the monastery of St. Elijah, which was not working and silently watched the path of tourists headed into the depths of the area. And here, to our joy, there was a fountain, where we refreshed ourselves from the increasing lunch heat.

Yep, this destination turned out to be interesting, gaining special popularity on Instagram lately. We stormed it relatively early, around 10 o’clock. On the way back, hordes of tourists came, thirsty for selfies from a strong place.

Along the route to Bekovi rocks

The next part of the route to the end was not characterized by specific places to relax, but we enjoyed the vast slopes of the Rhodopes around, the beautiful purple colors of the fields, and of course, the vast potato fields with which the village of Ravnogor is known.

The grill plates continued stubbornly here in the wasteland …

Final of the hike to Bekovi rocks

And so we reached the cherished finale, engrossed in sweet tales. The route turned out to be short enough not to get tired and long enough to do some sports activity.

After the bushes, a shelter appeared in front of us, modernized even with solar panels.

We waited patiently for the gathered tourists to take their share of the photo session, as the photo area is not very big, it is at a solid height and in general, you have to be careful where you step.

The place is secured with metal railings and has 2 benches where you can blissfully enjoy the breathtaking scenery.

Frozen in admiration, we could not close our mouths from the captivating beauty of the valley of the river Vacha and the mighty mountain slopes, immersed their skirts in its waters.

Vacha Dam is part of the “Dospat-Vacha” cascade, surrounded by the highest dam wall (144 m), and is one of the largest dams in the country.

After taking in our hearts with handfuls of the unforgettable panorama, we gave way to the next impatient visitors and went on a well-deserved rest.

The grill and beer were not a mirage.

It turned out that even here in nowhere, a man where can quench his thirst. Enterprising people had made a shady place and refreshed the ranks of hungry tourists from a bus adapted for this purpose.

We were even caught by a group of cyclists who told us that they were camping nearby and pedaling on steep routes in the region every day. Well done to the youth!

I took time for my favorite bouquet of herbs, which would later be consumed in the form of tea.

We left this heavenly place, saturated with a lot of positive energy and fascinated by the mosaic of colors around. I definitely recommend this destination and would love to visit it again.