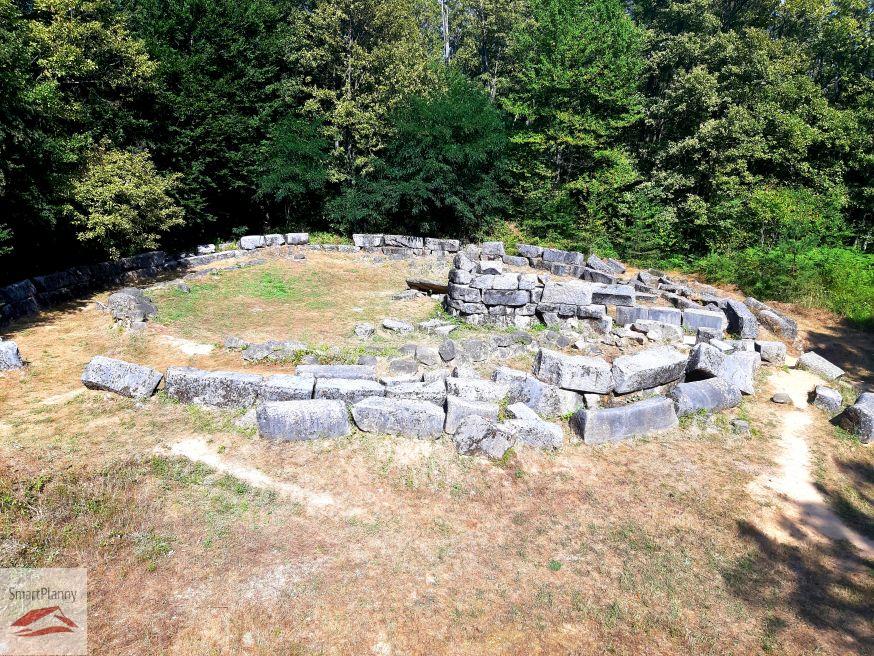 Here I will tell you about the most famous landmark in Strandzha mountain – the cult complex Mishkova Niva, the mysterious cave of the goddess Bastet and sketches from the ascent of the highest peak Golyamo Gradishte.

All of them are located near the town of Malko Tarnovo.

To visit them you need to register on the portal in the Border Police Malko Tarnovo (coordinates: 41.976254, 27.523908), as they are located in the border area. Register your name, car number and for how long you will be in the area of ​​the sites.

I would also like to note that during our tours of Strandzha, we were repeatedly checked by the Border Police.

The cult complex Mishkova Niva is easily reached by car, has a small parking lot and is well marked as a destination.

We excitedly toured all parts of the so-called Great Mound.

The sanctuary consists of a heroon (a fenced place containing a tomb), a necropolis, a Roman villa, ancient mines, and even the fortress on Golyamo Gradishte peak.

The complex dates from 5-3 BC.

The tomb is built of large marble blocks.

Part of the dromos (corridor), the floor, and blocks from the inside of the round domed chamber have been preserved.

The rotunda served as a tomb-mausoleum, initially honoring the hero or the Thracian horseman, and later Apollo.

Originally, the tomb was a dolmen with a fence, which evolved into a sanctuary.

The transformation is explained by the intensive use of iron mines nearby and the vow of successful work by their manager.

In ancient times, the region was one of the main mining and metallurgical centers in Thrace.

Although I have visited many Thracian tombs, Mishkova niva definitely impresses with its monumental size and area.

The domed building was surrounded by 2 fences (stone blocks) in order to prevent the landslide.

Gifts and the hero’s treasures were placed in the marble circle.

Probably at some point, it began to be forbidden to enter the space between the two stone fences, and the gifts were left in newly built rooms.

In front of the cult ensemble, there is an observation deck, from where we looked at the sanctuary from above.

One of the architectural masterpieces of the Mishkova Niva complex is undoubtedly the triangular pediment, which was above the entrance.

On either side are half-palmettes and an image of a shield and a spear between two sun-raised palms.

We especially went to the Historical Museum in Malko Tarnovo, where it is stored.

Another fragment found on Mishkova niva turned out to be interesting – a bas-relief with an image of a Thracian horseman or hero.

He was the personification of the old Thracian traditions and worshiped as a god of wildlife.

Unfortunately, the cult facility Mishkova Niva is in poor condition and it takes a lot of fantasy to imagine what the ancient design was like.

And here, as well as from many other sites in Strandzha, the stone blocks are used for construction of buildings in other places.

The sanctuary has been declared as one of the most endangered monuments in Europe.

After Mishkova niva we headed to Golyamo Gradishte peak and the cave of the goddess Bastet.

Golyamo Gradishte is the highest peak in the Bulgarian part of Strandzha – 709 m, located 3 km southwest of Malko Tarnovo.

If you come from Malko Tarnovo, the turnoff falls on the left. You can see an information sign, after which a dirt road begins.

Apart from the peak and the cave, the area is also known as a locality of a population of blue juniper.

The fortress at the top served as a shelter, observation post and guard of the area until and during the Roman period, but was looted by treasure hunters in the late 20th century.

We passed through the old border fence, which I was especially curious about, as I saw them for the first time.

In this part the path is flat. We reached a fork, from where we continued to the left.

It began a gradual climb to the top.

We met many groups of tourists, children, and even pets.

To the right of the path, just before the peak, is the mysterious cave, according to legend, associated with the goddess Bastet.

There was a small pond in the cave and several galleries inside the cave.

There were candles, icons, and … cats at the entrance.

The legend of Bastet

In the early 80’s, under the protection of Lyudmila Zhivkova, secret excavations were organized.

They were associated with the legend that this is the tomb of the Egyptian goddess with the head of a cat Bastet.

Vanga was also interested in the place, talking about a deeply buried sarcophagus in which the history of the world is written.

The results of the expedition were never made public.

Another interpretation of the secret tunnels starting from the cave is explained by the ancient Thracian mines in this area.

After the gloomy atmosphere around the cave, we continued the ascent to Golyamo Gradishte peak without effort.

At the highest part, you can see a concrete pyramid meaning the very top.
There is also a wooden panoramic observation deck.

A Thracian fortress was located on the top and there are remains of a fortress wall.

We admired the beautiful view of the green slopes of Strandzha and the border areas in Turkey.

On the left, in the distance, the silhouette of Malko Tarnovo was sparkling.

Mishkova niva, the cave of Bastet, and Golyamo gradishte peak are easily combined in one visit in the region of Malko Tarnovo.

They combine in one interesting cultural and natural landmarks dressed in mysticism and are a mandatory part of the traveler’s route in this region of Bulgaria.