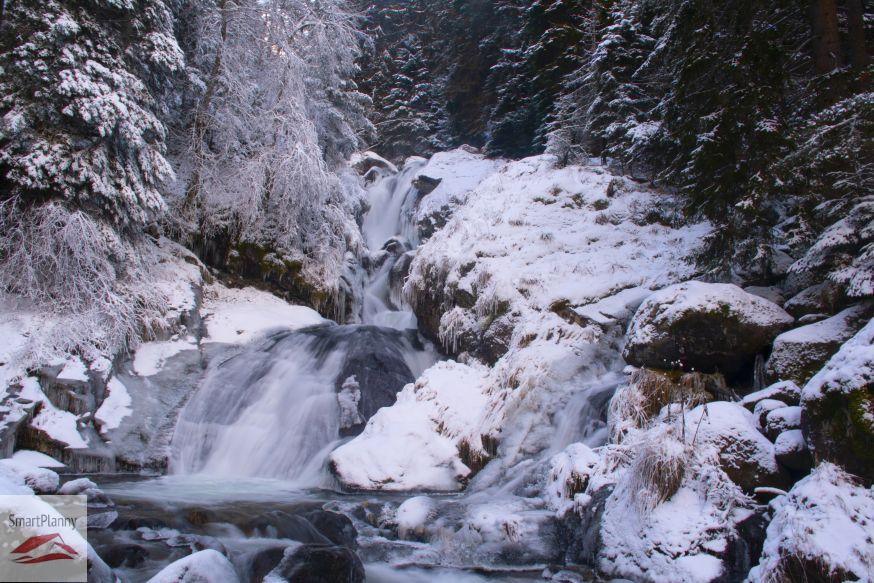 Distance: 2h in the direction

The eco-trail from the village of Bistritsa, Kyustendil region to the Samokovishteto area leads to the beautiful Bistritsa waterfall, which is amazing even in winter.

The route is about 2 hours long in the direction and is a little steeper at the beginning, but offers several places for rest and relaxation and unforgettable panoramic views of the Dupnitsa valley and Northwestern Rila.

A difficult start to Bistritsa waterfall

The trail to the Samokovishteto area and the Bistritsa waterfall starts from the end of the village of Bistritsa, where there is a spacious parking lot. The location is only 1 hour by car from Sofia.

Warning: there are several trails that start in the same direction towards the mountain.

After some hesitation, although we are coming for the second time, we found the right direction. It is marked with a yellow plate at the beginning.

From here, the beginning gave serious requests for the next views. Horses meekly grazed the meager blades of grass, their heads sticking out from under the snow. The chimneys of Bobovdol could be seen in the distance.

The map of the route is well made visually and creates a good idea of the length and interesting places along the way.

Before the actual ascent, we reached several romantic pavilions in the area with a dramatic name: Devil’s Mill. There were also remnants of solar lamps, unfortunately, taken care of by malicious mischievous hands.

There was a steep climb in the woods until you reached the main path. The markings are quite sparse, the trail is rather scree, and the climb and then the descent back at times were on all fours.

We reached the main path, which is a wide path, which can no longer be confused to the waterfall.

A place for recreation and beautiful views – Sofradzhik area

The next interesting location is the shelter in the area of Sofradzik. There is a barbecue area and a terrace, from which the entire Dupnitsa valley is located in your palm.

From here you can see the modern new park of Dupnitsa – Rila Park. We have already visited it several times and we are fascinated by its wonderful infrastructure and organization. Sports grounds, well-designed barbecue areas, beautiful promenades, a lake with pedal boats and even the zoo. These are just a few of its attractions. I strongly recommend!

From here you could even see the church in the center of the village of Bistritsa – St. George.

We admired the landscape and gathered strength for the next stages on the way.

And they were not far. Only after a few meters we came across an amazing cascade of icicles. The crystal pendants shone in all colors under the caressing rays of the sun and gave the impression that we were in an open-air cave.

The heavy rains and frosts of the previous week had left their impressive mark on nature here.

The stunning effects along the way continued. Within a few meters there were terraced levels with surreal icicle waterfalls as far as the eye could see.

The path on the right was pleasing to the eye with the picturesque views of the mighty slopes of Rila Mountain.

Pilichik area – rest and the beginning of suffering

We reached the shelter near Pilichik area. From here, a small stream meandered along the road, hinting at what would follow.

Shortly after the shelter, the great adventures began. From the flowing forest streams on the slopes of the mountain, the water descended, unfortunately, not into the gorge, but along the path.

We tormented ourselves on the icy surface of the path. Unfortunately, there was nowhere to step, so we carefully advanced along the insidious slide, driving our “hooves” on its hard surface.

I kept telling to myself, this ice section will be short, but no … We passed through the Vlashka Bara area, but the situation almost next to the waterfall itself did not improve.

There was no way, at times we stepped into the icy mountain river. We skated ….. without skates. I couldn’t even get the pieces of ice out of my shoes because they were frozen, haha.

After the vicissitudes, we reached the cherished goal – the amazing phenomenon Bistritsa waterfall. The magical sight made me forget the cold and the troubles so far, and I recharged the batteries from the intoxicating natural picture opposite.

The water stretched casually between the snow-covered rocks around it. The spray flew in all directions and created an unforgettable winter extravaganza.

The Samokovishteto eco-trail to Bistritsa waterfall is a wonderful destination for a walk in the area of Dupnitsa. It’s a bit more adventurous in the winter, but you can’t see the effects of Swarovski in the summer anyway! Gazebos, shelters, views and a waterfall – the interesting places are many and make the route very pleasant and memorable.