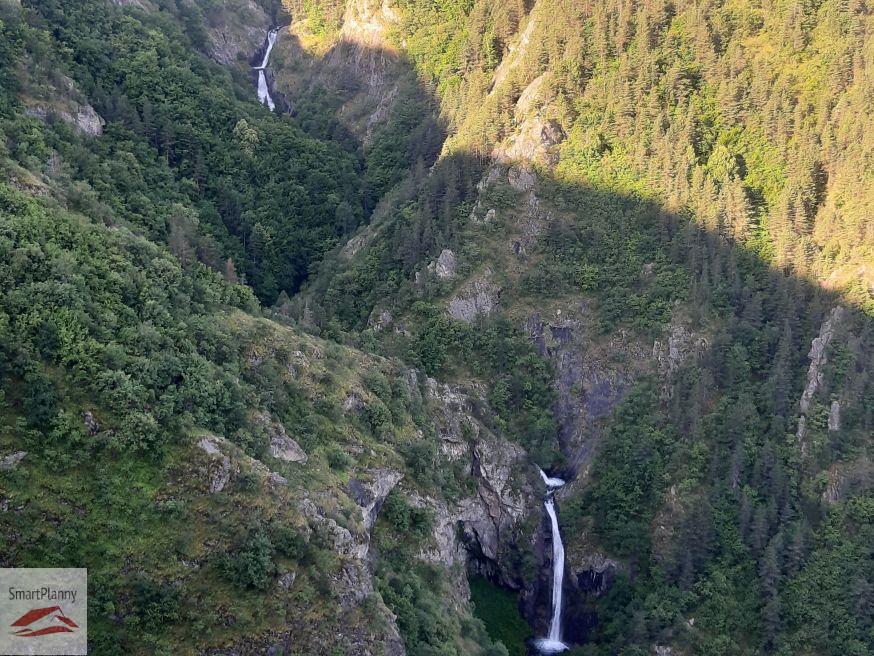 The route to Golyam Kamak peak above the village of Ovchartsi, Kyustendil region is steep for the most part when you climb to the top and that is why I define it as a bit more complicated.

You will enjoy an alien view of two of the Ovcharchenski waterfalls, including the especially famous Goritsa.

On the ridge you will admire the flat part of the Dupnitsa valley, the rounded slopes of the shy Verila, the proud Vitosha on the horizon, as well as the steep powerful slopes of Rila.

We started the route from the eastern end of the village, where the path starts from two houses located opposite each other.

There was a very steep scree, which I took on my way back with a lot of duck walking.

Phase before the waterfalls

The trail, for the most part, looked like the photo below. The walk was on rocks and gravel and there was a steep slope between the rocks. On the side we were surrounded by a pine forest.

In many places the path forked and split into small paths and gutters, which then gather. We followed the green markings to the top.

From time to time we saw high-altitude panoramic views of the valley, which hinted at what we were heading up.

We reached a rocky platform, from where we turned slightly, oriented to the roar of waterfalls in the valley.

Everything around was colored in the emerald colors of the forests. Only the two magical crystal jets stood out brightly and filled our senses with the furious rumble of the falling water.

Unexpected meetings on the way to Golyam Kamak, Ovchartsi village

The first surprising encounter was a huge anthill reaching to the waist with industrious little ants pecking back and forth. Then we saw another one.

So many mushrooms I had never seen. Unfortunately, I do not know them and I was not afraid to pick them up, but they were pleasing to the eye exotic companions of our route.

Walking through the pine forest, we came to a new attraction.

It was a fountain decorated with a wonderful stone costume. Unfortunately, the extravagant fish-head spout was broken, but we did a restoration of the detail.

On the path ahead followed the Stalevitsa shelter, nestled meekly in a large meadow.

Following the markings, we passed through a path in a pine forest, where almost no sunlight penetrated. The big descent started before the cherished final – Golyam Kamak peak.

In the last part of the trail, there was an exciting climb between the two rocks, which can be seen in the photo above.
The climb was short and did not require special equipment.

Reaching the grande finale, we smiled at the sight of the bonus views from the top. The mountain ranges surrounding the valley, the chess squares of the fields and the red tiles of the villages.

On a lower hill in front of us was a stone cross protecting the village.

On the way back, I gave myself a bouquet of St. John’s wort, which I later consumed as tea. What, I worked hard, climbing the slope!

Other eco-trails in Kyustendil region: here