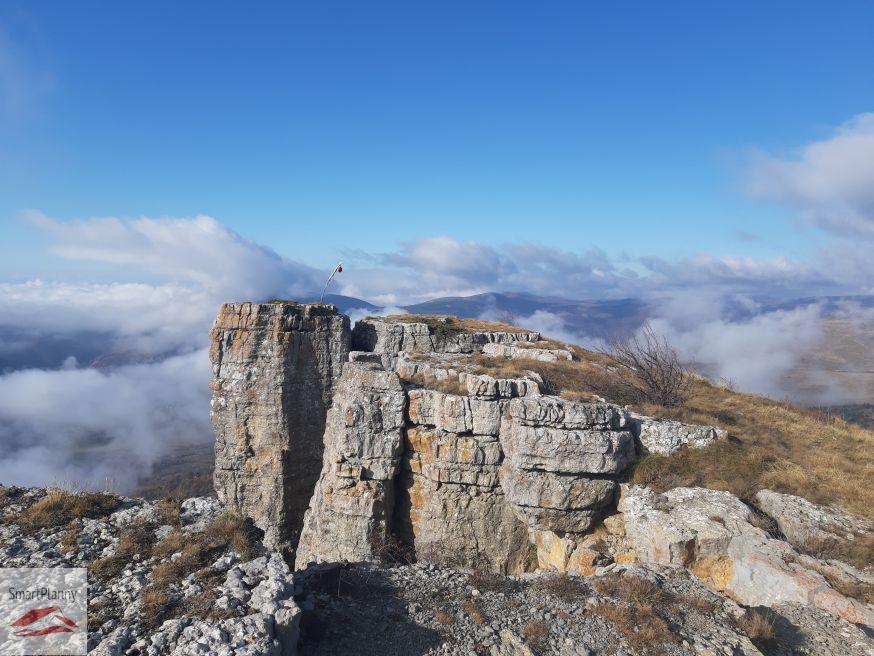 The rock phenomenon Stolo in Ponor Mountain is one of the trendy destinations for Instagram photos and videos with a drone lately.

Apart from the impressive karst forms and high-altitude views from the rock crown, you will also enjoy unique pastoral landscapes along the route.

How to get to Stolo – Ponor mountain?

Ponor Mountain is a part of the Western Stara Planina with widespread karst forms (sinkholes), whence its name, typical with extensive pastures on its ridges and lack of forests.

The rock phenomenon Stolo in Ponor Mountain can be reached from the neighborhood above the village of Dobravitsa. It is located 1.15 hours from Sofia (via Konstinbrod and Iskrets).

Two-thirds of the route is easy and I would say that you go on a “royal” dirt road with a gradual climb.

At the last third of the route, the trail is not well-trodden and although it is already on the ridge, there are grasses and rocks and you have to walk more carefully on the GPS track to the endpoint.

We parked the car at the starting position and passed several idyllic old village houses from the neighborhood on a clearly defined path.

The rock crown decorated with the pearl Stolo was high to our left.

The electric shepherd has a very low current voltage and has an unpleasant but harmless sensation when in contact. We skipped it without a problem and moved on.

There was a long walk along the ridge of the hill on a well-maintained path. Stolo could be seen for the most part in the distance.

To the left and right were the neighboring peaks, with the typical Ponor Mountains flattened ridges.

These huge stone circles looked like alien shipyards to me.

The pastoral picture is formed by ….. attention: about 100 cows, here and there a bull and a few horses grazing calmly or licking salt around the track.

They definitely complemented the impression of an alpine landscape.

We had no problems with them, they were good-natured and looked at us meekly with big cow eyes.

Gradually the trail made a turn and opposite we saw Sarbenitsa peak (1,482 m) – one of the highest peaks of Ponor mountain.

Here began the unpleasant part of the route, as there was no well-kept path. The cows were not here and the grasses grew taller.

There was a low scattered cliff with interesting details. We went around it on one side, on the way back on the other.

Finally, Stolo jumped into the distance in front of us, and there were no more bushes on the ridge and it was easier to walk. Hooray!

Near the edge of the ridge we were carried away by stunning views down to the valley.

A row of carefully packed bales fluttered like a necklace in the center of this beauty.

The fluffy blanket of mist drifted in large waves, and we felt like we were flying over the clouds.

On the chair of Stolo – Ponor mountain

The rock phenomenon Stolo is detached from the mountain with several large crevices. Its unusual photogenicity is also due to the horizontal stripes cut by the artistic natural hand.

A flag, or rather what was left of it, rose on top of it.

On Stolo itself, my senses sharpened and I even stopped breathing.

The cracks, the abyss, the height, the epic panorama took my breath away.

We noticed another group of enthusiasts walking briskly towards us. We hurried with the photos, we wanted this rock extravaganza just for us!

The typical theatrical stands from the top of the phenomenon followed.
The fog lifted its fluffy skirts for a moment, and we were able to see the impressive panorama of the huddled houses below.

As the next group began with their acrobatic tricks from the top, we finally caught a glimpse of the whole apocalyptic portrait of Stolo, including a huge chamber of fallen rocks at his feet.

I expected a lot, I got a lot from this route to Stolo – Ponor Mountain.

The relatively easy ascent, the well-formed route for the most part and of course the epoch-making beauty of the rock formation made it an unforgettable route.

Other destinations in Sofia district: here