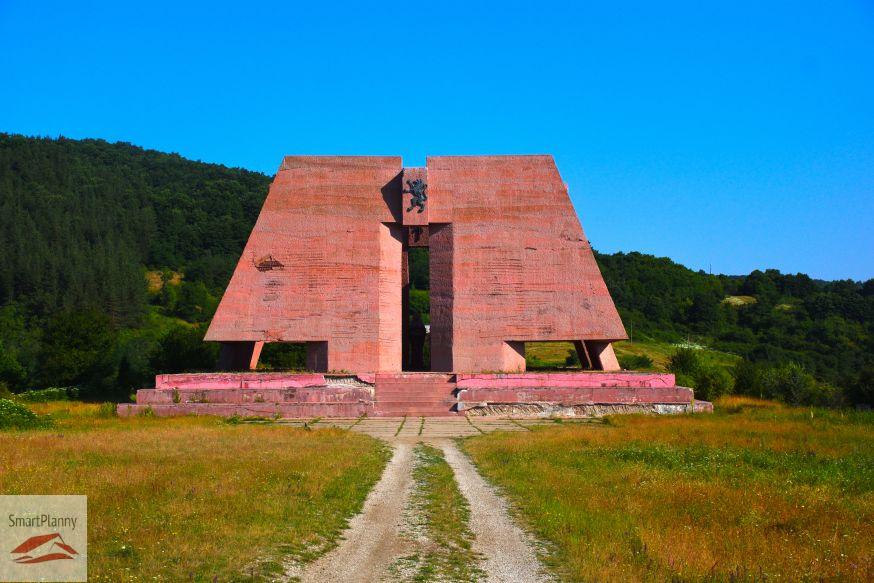 Pantheon Mother Bulgaria is a futuristic memorial built near the village of Gurguliat, connected with those who fell for the victory in the Serbo-Bulgarian war in 1885.

The place of the mausoleum was chosen at the highest place in the village, called Tsarkvishte.

Interestingly, the pantheon is made of red concrete and has a height of about 20 m.

The history of the Pantheon Mother Bulgaria

In the battle, the Bulgarian troops were much smaller, but still managed to stop the Serbian attack. Locals, including women, also took part.

The Bulgarian soldiers did not allow the line protecting the road to Slivnitsa to be breached.

The Bulgarian army even launched a decisive counterattack and led to the liberation of Pirot, the emergence of the approaches to Nis and forced Serbia to capitulate.

The pantheon is built in the form of a truncated quadrangular pyramid with an opening to the sky. An alley, 120 meters long, leads to it in the field where the battle took place.

In the center of the composition is the figure of Mother Bulgaria, a statue of a beautiful Bulgarian woman sobbing for her murdered sons.

The names of the Bulgarian brigade commanders from different parts of Bulgaria are written on the walls.

State of the Pantheon Mother Bulgaria

It is noteworthy that the pantheon has seen better times, but despite its poor physical condition, it still surprises with its gigantic size and unusual abstract shape.

I must point out that the road to Gurguliat was very unmaintained and dotted with holes, resembling a lunar landscape!

I shivered when I looked at the field where the decisive battles had taken place and Bulgarian blood had been shed.

What else to visit in the region of Pantheon Mother Bulgaria?

We decided to find the other landmark in the region, the eco-trail Galabovtsi – Petlyuka (GPS coordinates: 42.80610, 23.00417). The trail starts on the outskirts of the village of Galabovtsi and is located immediately after the Guest House “Petlyuka”. It is also suitable for cycling.

The trail is famous for its picturesque gorge, rock formations, caves with spring water, remains of a fortress, an observatory and panoramic sites.

Unfortunately, in June, when we were there, the grass had overgrown the track and we did not have the courage to tread in the high weeds.

We hope that in the future we will have the opportunity to visit it and see this beautiful place in Bulgaria.

The Pantheon Mother Bulgaria near Gurguliat is undoubtedly an interesting place to visit. Its cosmopolitan dimensions resemble the Panorama in Pleven. His posture cannot be missed from afar.

For us and the next generations it is worth taking the time to honor the self-sacrifice of the people who gave their lives here in the name of the homeland!