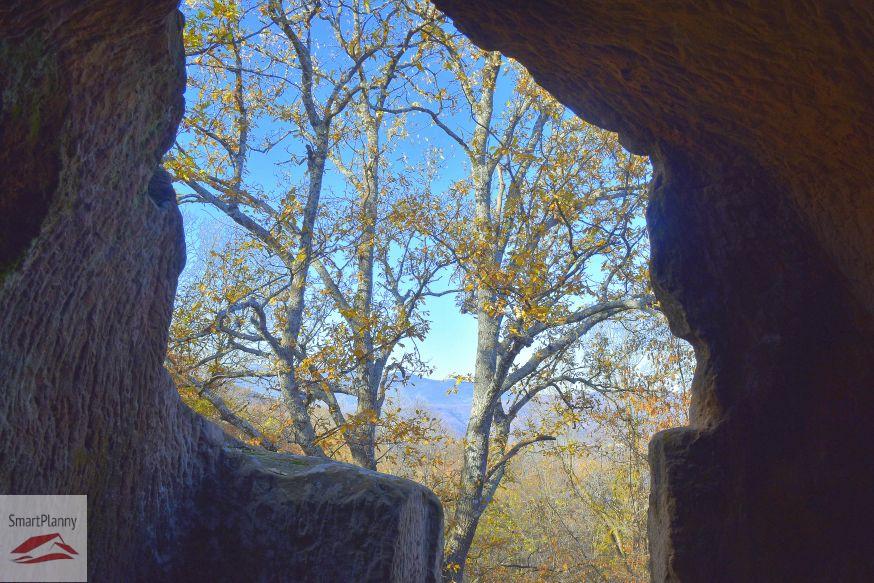 The fortress Bozhenishki Urvich is a pearl that has preserved valuable sketches from the Second Bulgarian State, located near Botevgrad.

Perched on a high hill, surrounded by inaccessible sheer cliffs, it offers incredible views of the surrounding slopes and takes us back to another time of loyal boyars and bloody battles.

The Bozhenishki Urvich Fortress is located 87 km (1.20 h) from Sofia and 20 km from Botevgrad, on the outskirts of the village of Bozhenitsa.

It is reached by an asphalt road that crosses the bridge over the Bebresh River, reaching the Urvich holiday home.

Here we were greeted by three cats, who carefully inspected if we brought them something to eat.

The trail starts from the sign for the project funded by the European Union.

As we walked towards the medieval stone fortification we came across an interesting forest formation – three huge tree mushrooms forming a step on a tree. What dwarf got in here, um?

And so, without much effort we reached the goal.
At the entrance there was a map of the whole fortress, from where we orientated ourselves for all the objects in it.

Here we were impressed by the 10 m deep water cistern, plastered on the inside with mortar so as not to lose the spring water.

A treasure of over 1,300 silver coins from the time of Ivan Shishman was found near the gate. An interesting fact is that they were cut at the edges in order to save the precious metal in the difficult times of war.

Undoubtedly one of the pearls of the excavations is the discovered stone inscription of exceptional value for the stone archive of Medieval Bulgaria.

“I Dragomir wrote. I, Sebastos Ognyan, was with Tsar Shishman Kefalia and suffered a lot of evil. At that time the Turks were at war. I maintained the faith of Shishman the king.”

It was made by the governor of Sofia Sebastos Ognyan and recreated with sad words the difficult turbulent times before the fall of Bulgaria under the Ottoman yoke.

Numerous arrowheads and spears, stone battle balls, and skeletons of warriors were found near the fortress walls, which confirm the legend about the battle of Sebastos Ognyan with the Turks (1395).

The inscription is protected by a metal grille and is difficult to capture in full. A curious fact is that the medieval stonemason did not size the slab on which he worked. He first started with larger letters and reduced their font to the end of the covenant.

We went to the inner-fortress living quarters.

The size of the fortress is impressive. Its interior covers 1600 square meters and is surrounded by three fortress walls. Two of them were built V-VI in the time of the emperors Justin and Justinian. The third was built in the 14th century during the reign of Ivan Shishman, when the fortress flourished.

Another interesting element was a rock niche which has been used by watchmen. There were a bed and a hearth in it for the soldier who was on duty.

Above the rock-dwelling we reached the rock church – the other pearl of the fortress Bozhenishki Urvich.

There was an image of St. George the Victorious carved on the rock, but it was destroyed by treasure hunters.

The atmosphere here is quiet and immersive. You fall into timelessness and hear only the falling leaves from the trees outside.

We climbed the eastern observation post above the rock church. Amazing views in all directions and an explosion of autumn colors.

The site was vast, with interesting concave pits and even a whole rock throne, in which, of course, I perched.

The next point of interest was the rock mass to the west with a battlefield next to it.

Here was the southwest corner tower. The rock massif has been connected with four other fortresses in the region. During the day the connection was maintained by a flag, and at night by torches.

There was a hiding place for eight people, which is buried today.

Another discovered observation point was the post Voyvodov Kamak – the main observation base of the fortress. It is here that it is supposed to have been the tomb of the famous Sebastos Ognyan – the ruler of Bozhenishki Urvich.

As I was writing this article, I realized that despite a careful look at the fortress, we missed a lot of things from it, either because they weren’t discovered yet, or because we didn’t expect so many artifacts.

Undoubtedly, her story and that of her contemporaries captivated us. We will be back again for further discoveries!

Other destinations in Sofia district: here