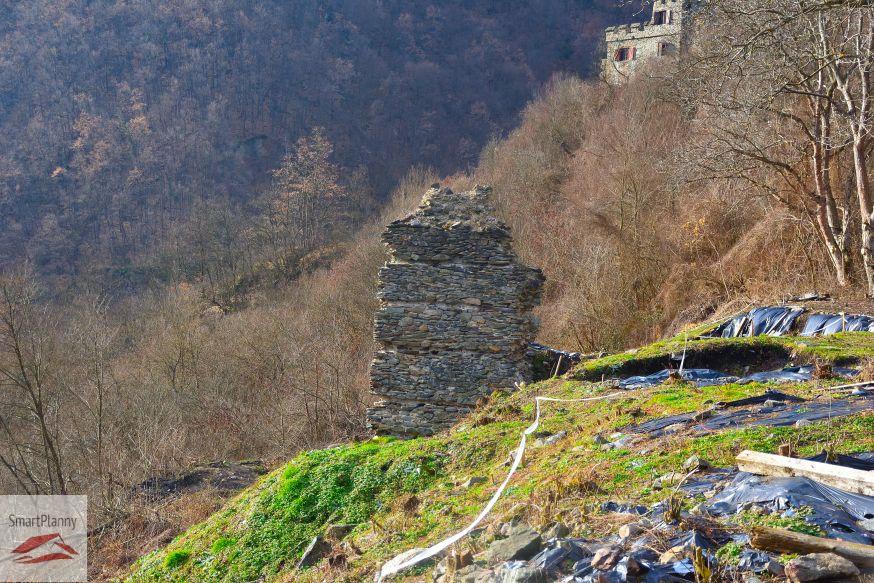 Urvich Fortress is the remains of a medieval fortress from the 9th – 10th century, also known as Kokalyanski Urvich.

It is located 20 km from Sofia, after Pancharevo in the direction of Samokov.

It is perfect for a quick circular route in nature with a historical flavor and even includes a visit to the monastery of St. Nikolai Letni.

Also known as the last fortress of Shishmanovtsi, it takes us back to the last years of the Second Bulgarian State, to the times of glorious kings and epic battles.

How to reach Urvich Fortress?

The starting point for the historical landmark was the picturesque meander that the river Iskar forms in the Lozenska mountain.

There was a turnoff with a small parking lot and a fountain, crowned with a proud gaze – a monument to the laborer.

A paved path began behind the monument, which descended to the Iskar River. Even in our typical, early hour of storming sites, there were other enthusiasts.

We passed over the raging waters of the river and the pleated foam diaper under the bridge. A large banner with a picture of the monastery stretched between the trees instilled a modernist spirit.

Sites on the path to Urvich Fortress

The trail is short, but it is rich in beautiful forest views. And not only.

Literally, a few meters before us appeared in all its emerald grandeur, a medieval amphitheater. Of course, the scale was modest, but that didn’t stop us from imagining the battle arena now overgrown with branches.

Walking along the spacious forest path, after 10 minutes we reached the fork for the monastery of St. Nikolai Letni. There are several signs along the way, so you have nowhere to go.

Monastery of St. Nikolai Letni was extremely nice. Infinitely silent against the background of the busy road to Samokov, whose noise the forest managed to isolate.

After touring the monastery, we rushed to the fortress accompanied by the monastery guard – a playful dog. Our loyal new friend was with us all the time and even sent us to the finals!

At the gates of Urvich Fortress

We went back to the fork with the sign for the monastery and turned right.
After a few meters, the path makes a left turn of almost 180 degrees. There’s a small, barely noticeable sign, so look around for the turn.

After about 10 minutes we reached the first remains of the fortress Urvich.
The fortress is associated with the heroic defense of Sredets against the Ottoman conquerors during the Second Bulgarian State.

The defense was led by Tsar Ivan Asen V (or Tsar Yasen), who died here with many of his wars. Huge mounds of human bones have been found, hence the name Kokalyane.

From here he fought epic battles and the young Ivan Shishman, until the fortress fell, after the conquest of Sofia.

Undoubtedly the big attraction here was the 7-meter defensive tower, watching the approach to the fortress. Against it, stood a private villa, with an architectural vision resembling that of a fortress.

From the road, the uninitiated can easily get confused and wonder what this stable building is with all the medieval attributes they have never heard of.

We looked with interest at the remains, which were apparently in the process of restoration.
On the highest part of the fortress was the medieval church-monastery of St. Elijah.

We left the fortress with the thought of the glorious times when this place was lively.

After a few meters, we reached the foot of the private villa. From here, on a barely noticeable path to the left, we turned into the bushes.

The path down the slope offers a variety with an alternative and shorter return route.

It was steep and quite overgrown with branches, but that only strengthened our adventurous spirit.

In addition to seeing the modern reading of the fortress in the face of the villa below, you can also enjoy futuristic mosses decorated with moss.

The last section, which took us right to the amphitheater, was very nice. It was as if we were in the realm of the Lord of the Rings, expecting to see an elf’s ear at any moment.

Urvich Fortress and Nikolai Letni Monastery are a great idea for a short walk if you are late for a hike and looking for something different.
Tune in to a historical wave, because the remains will definitely turn the dusty pages of history and bring to life the epic sketches that took place in this remarkable place.

Other interesting sightseeing in the area: Kokalyanski monastery

I recommend also the peaceful and picturesque destination of Peyova buka hut!