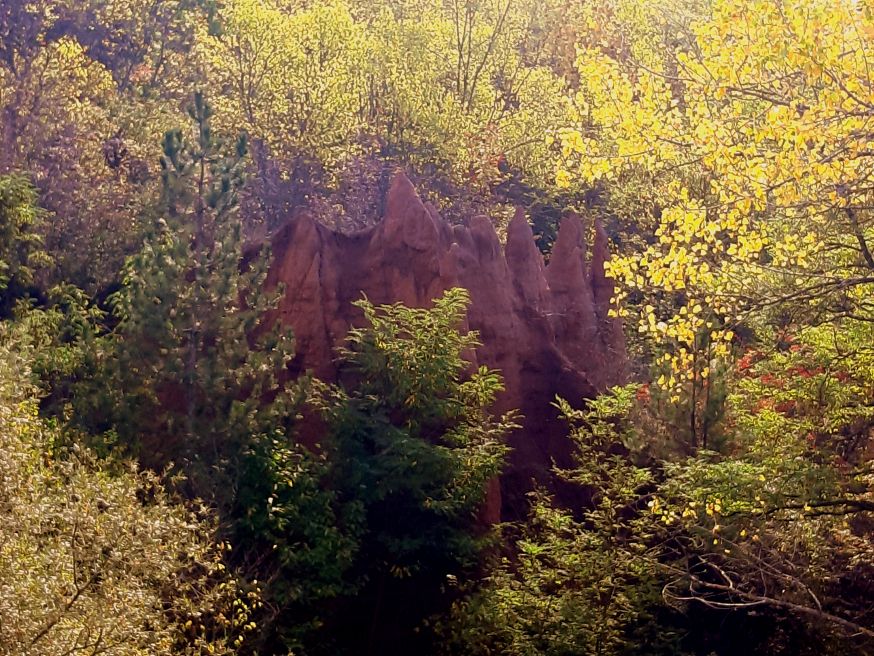 The Katina pyramids are a surprising destination in the vicinity of Sofia.

Not very well known as their brothers in Melnik and Stob, but easily accessible as a location.

How to get to the Katina pyramids?

The village of Katina is located half an hour by car from the center of Sofia.

The name of the village originates from “hidden“, connected with its nestled location and the hiding of Bulgarians here during the Ottoman times.

The pyramids are located on its outskirts.

They are formed as a result of erosion in landslides.

Unfortunately, they are constantly collapsing due to the artificial swamping of the valley, where the vegetation of its slopes is located.

The pyramids are not very well marked and a small dose of ingenuity is required so as not to miss the path for them.

We parked our car next to the seemingly new monastery of St. 40 martyrs.

This was a kind of start to the route.

We were surprised by the many parked cars. Where did this turmoil in these Covid times come from?

It turned out later that there was a baptism in the temple.

We took the dirt road from the monastery and came to the first resemblance to a sign for the Katina pyramids.

From there, with a brisk step, we headed down and, carried away in tales, slightly passed the deviation of the pyramids. I believe we are not the first!

Instead, we noticed a small swamp with water lilies and two fishermen rustling in the bushes.

We went a few meters back and saw the second sign for the pyramids. Unfortunately no more attractive than the first.

Meeting with the Katina pyramids

From here we slipped into the forest and on a light path in ten minutes we reached the expected view of the pyramids in all their glory.

Here is the place to note not to expect to see Cheops or anything like that.

They are charming in their own way. Quiet and hidden in the forest bushes.

From there we continued up the other side of the hill along a relatively visible path.

We went through a pine grove, at the end of which we found a bonus.

We found ourselves on a protruding rock, where another pyramid was hanging under our feet.

We admired the beautiful view of the spacious Sofia field and the Blue Pool nearby.

The combination of the already snow-covered Vitosha Mountain and the fiery colors of the surrounding forests were unique.

The walk to the Katina pyramids is a wonderful breath of fresh air if we are looking for something different from Vitosha near Sofia.

There is something to be desired as a marking, but the trail is short, the site is nearby, so you can not miss the landmark.

I hope that measures will be taken to save this natural wonder and make future generations happy with its beauty.

Other routes around Sofia: here.