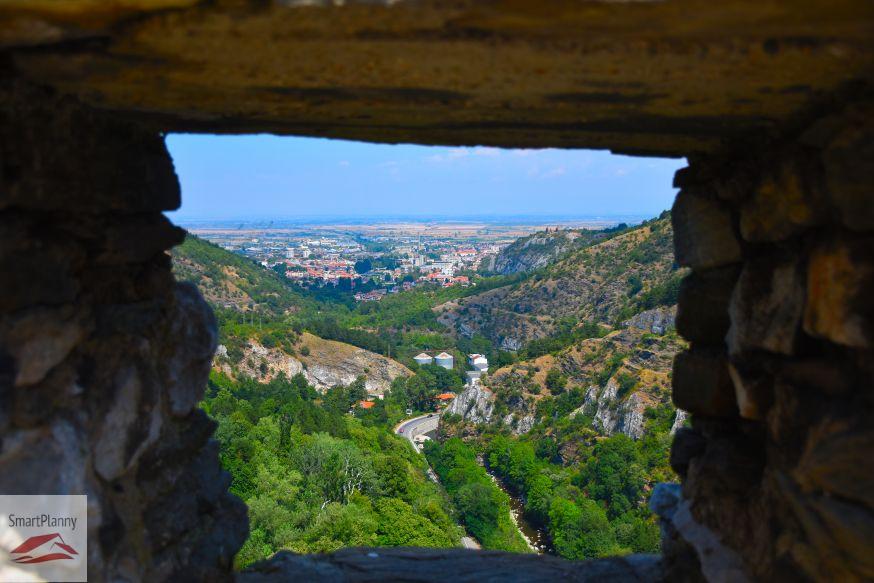 The region around Pamporovo offers a wide variety of natural, historical, and religious sites. The incredible beauty of the Rhodopes surprises us from every angle and makes us come back here again and again.
In this article, I will tell you only about a few of the dozens of interesting places in the area of ​​Pamporovo, where we stayed. Since our group consisted of three generations, I carefully selected the destinations so as to hold the attention of the teenagers, not to tire my parents of walking, and not to miss them as passengers in the next planned tours.

The Bride Eco-trail near Pamporovo

This was my second visit to the Bride eco-trail. I chose it because of its proximity to Pamporovo and its lightness. It takes about 30 minutes without any effort in a direction that is 900 m long and has a displacement of 40 m.
It is located 9 km from Pamporovo in the direction of Smolyan. The beginning is at a big turn, where there is a parking lot, a climbing wall and usually a lot of people. GPS coordinates: 41.60161, 24.69877.
From here start the paths to Smolyan fortress “Kaleto” and the beautiful monastery “Monastery of St. Pantaleimon”.

Unfortunately, just as we were about to conquer the path, a bus with camp children poured into the parking lot, loudly attacking the same route. So far, my idea was gone, for the teenagers from our group to take the alpine trolley, which is the culmination of the end of the Bride eco-trail, and to enjoy the silence in this natural paradise.
The route is informative and interesting with the information boards about the rich flora and fauna in the region. The signs are at almost every step.

Undoubtedly one of the attractive places on the road is the panoramic site Nevyastata ( The Bride), which offers a breathtaking view of Smolyan and the protruding metal cross, high above the rocks.

The trail is dotted with gazebos and rest areas, so you can take a breath and enjoy the beautiful nature around. At the end before the last section to the trolley, there are swings and climbing equipment for children.

The late antique and medieval fortress Kaleto in the Turluka area starts from the same parking lot I mentioned above. It is about 1 km long, takes about 15-20 minutes, and has a displacement of 30 m.
The fortress was built in the VI century, during the reign of Justinian I. It was built in a hard-to-reach region, with visibility in all directions. It served as a military fortress, which controlled communications on the Central Trans-Rhodope Road. From it, there was visual contact with the neighboring fortresses in the region.

Its second period of exploitation was in the XI-XIII century when a Bulgarian fortress was built on it.

It is one of the impressive numbers of 13 fortresses and sanctuaries found in the region of the Middle Rhodopes.

The steep terrain in front of the fortress walls made it difficult to attack. This also explains the lack of loopholes at the entrances and on the walls.
There is a house with a panoramic playground and a separate terrace, secured with railings with breathtaking views of Smolyan.

We reached massive large cliffs, jagged like loopholes, from where the whole area around, near and far hills revealed in the palm of my hand.

Another interesting destination with a religious spirit is the monastery of St. Pantaleimon, which is reached by a third path starting again from the parking lot mentioned above. Very convenient, everything is together.
The monastery, painted in bright colors, with well-maintained buildings and a courtyard, was founded by a Muslim woman who, after a mystical experience, converted to Christianity and adopted the name Christina.
The great popularity of the place is due to Sister Christina, who according to the devotees is endowed with healing and prophetic gifts.

We can not miss the second largest monastery in Bulgaria – Bachkovo Monastery, which is easily accessible on the road Plovdiv – Smolyan.
Its enormous size, its historical value as a literary and educational school, and of course the miraculous icon of the Blessed Virgin, covered with silver are the object of reverence and worship by a constant stream of believers.

One of my favorite fortresses in Bulgaria is Assen’s Fortress.
Perched on a high cliff, 2 km from Asenovgrad, it obeys with her majestic and romantic posture.
The high slopes on which it is located have made it absolutely inaccessible in the past.
Dating back to the time of the Thracians, used by the Romans and Byzantines, it was significantly expanded and fortified during the reign of Tsar Ivan-Assen II.
Today, the fortress itself has not been preserved, except for the fortress church “Church of the Holy Mother of God“.

The view of the Thracian lowland from its high loopholes is magnificent. Below is the road to the Bachkovo Monastery, on which it was extremely dependent in antiquity.

Curious are the wall cannons displayed around and the stone inscription of Tsar Ivan-Assen II, carved on the southern slope of the fortress.

Whether during the winter or summer season, the region of Pamporovo always fascinates and has something to surprise its visitors. Hills, fortresses, eco-routes, incredible panorama attract tourists like a magnet and reveal new touches of the emblematic nature and history of Bulgaria.