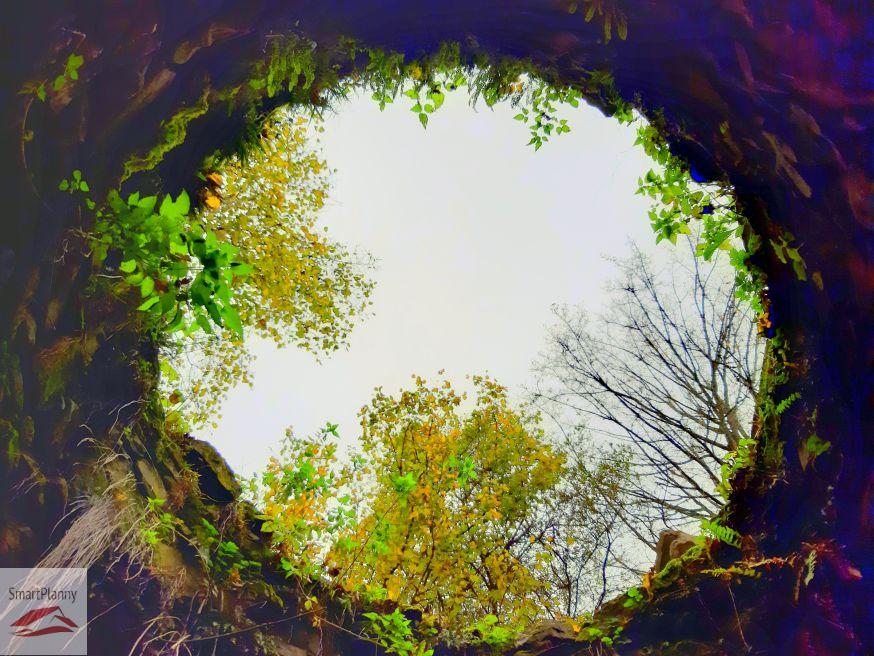 Temple-well near the village of Garlo is an amazing and little known landmark located 1.15 hours from Sofia in the direction of Pernik.

In addition to its mysterious architecture, unknown in our lands, along the route, you can see an unusual Latin necropolis and a magnificent view of the Krasava Dam.

We reached the starting point of the route passing through the center of the village. Then we passed the village church and reached a white house with a high fence.

There were a fountain and a small meadow where we parked.

From there began a dirt road to the temple-well, which could be passed by off-road vehicle.

We reached a small neighborhood with several houses representing the villa area of the village.

There was a well-formed meadow with an Old Garlo sign and even an avant-garde bridge in front of one of the houses.

Then on the right side of the road, we reached a medieval Christian necropolis or the Latin cemetery as the locals call it.

The unusual round massive ritual plates added additional mystique to the route.

Here is the place to note that we again found ourselves in the favorite hunting hour of the local group ( around 9 am).

Twice they stopped us and warned us that the forest was full of armed men, but nothing could stop the Indiana-Jones spirit in our country.

We approached the Krasava dam.

From it we turned left and passed along its dam wall, which can be seen in the photo below.

At the end of the dam wall was a small metal bridge, which was key to the next part of the route.

The climb up the hill began along a path that could be seen after the bridge.

An important turn to the right was where the path began to follow the length of the dam. There was a small pyramid of stones as a landmark.

This was followed by 2 concrete columns.

Along the dam wall, there were wonderful views of the Krasava dam and we did not forget to enjoy the autumn nuances.

The path became more and more overgrown and the branches surrounded us everywhere.

We reached a concrete tank, from where we turned left.
The last ascent before the mysterious goal began.

Right at the foot of it, a wooden sign finally appeared – To the well. Yu-huu!

We stopped at the foot of a stone staircase, which turned out to have been completed during the archeological excavations.

The temple-well is dated to the XII-X century BC. and is the only such facility in our lands, atypical of the Thracian culture, whose dolmens were built later.

It is believed to have been built by the people who built the sacred wells of Nuraghi on the island of Sardinia. It passed through our lands coming from Mesopotamia.

Traces of sacrificial animals were found in the temple, which shows its sacred and cult character.

An unusual arch appeared at the entrance of the temple.

We passed through the corridor (dromos) to reach the round hall (tolos).

The dromos is built with a cyclopean coating (large rough stones, located close to each other).

In the center of the round room was an empty 5-meter well with a ruined wall on one side as a result of treasury raids.

It is explained by the cult of groundwater of its mystical builders.

It is believed that the winter solstice was observed at the arch by means of a mirror placed at the bottom of the well. The whole facility was something like an ancient telescope.

The dome of the round hall had an opening (opeion) at the top, which was artificially widened during the restoration. It is assumed that celestial bodies were observed through it.

The temple-well near the village of Garlo is an extremely interesting destination for the traveler-discoverer.

It combines in one – a reservoir, a temple of water and a calendar used for astronomical purposes.

We hope that the remarkable architecture will not disappear left to the vagaries of time and nature and that something so unique will be preserved for future generations!