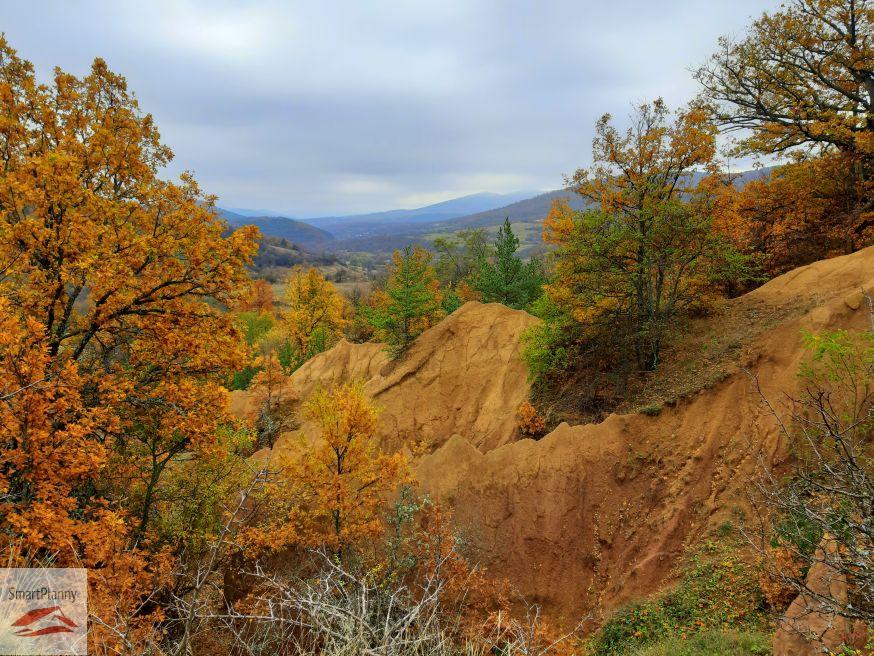 The fabulous Earth pyramids near the village of Banishte, Breznik municipality, Pernik district are called by the locals with the exotic name Rovinite.

They are easy to reach and although they are not as colorful as the Melnik and Stob pyramids, they deservedly occupy a place among the unique landmarks in Bulgaria.

Beginning of the route to the earth pyramids Rovinj

We reached the center of the village of Banishte and on the village square we asked the locals which way to go to the pyramids, as we saw that there were two options.

They directed us to the beginning of the village, where even before the sign there was a sign on the right “To the Pyramids“. There was a substation in front of the sign.

We took the muddy dirt road and in two places where there was a fork we kept to the left.

Here is the place to mention two wild apple trees along the route, because of the fruits of which I think we will return here again. There is no such taste!

It wasn’t long before we saw a path winding up the slope where the pyramids were supposed to be.

A slight climb began and we enjoyed a beautiful view of the village of Banishte and the slopes of Erulska Mountain.

Climbing the top of the hill, the pyramids fell to the left.

They are located in a small valley and are slightly hidden among the trees and bushes. It is about 50 meters long and about 20 meters wide.

At the earth pyramids of Rovinite

And here they are, the humps of the earth pyramids of Rovinj.
Their height is about 5 meters and should not be stepped on so as not to collapse.

We looked at them from a path that passes above them and then went down to their beginning, where we were able to see them more closely.

There were a few here that had the shape of large drops.

The colors of the Rovinj were in unique harmony with the autumn colors around. The artist-nature had swirled masterfully with orange strokes on the canvas.

A huge mushroom enjoyed its good neighborliness with its impressive neighbors.

The arrowslits impressively gave a mysterious silhouette to the surreal sand formations.

Here I took a closer look at the back of the dragon, which was lying down and napping blissfully in the valley.

I shot non-stop and enjoyed this wonder of nature, which seemed to come from a fairy tale.

Another landmark in the village of Banishte is the colorful church of John the Theologian, which is located at its western end.

The church had a difficult past, destroyed and looted by the Ottomans. They spared none of the monks and demolished the temple to its foundations.

Today you can see the third surviving building over the years, painted with exterior and interior murals by unknown painters.

The earth pyramids Rovinite near the village of Banishte are impressive sand formations, still undiscovered by mass tourism.

I hope they will be preserved and enjoy us in the future with their fabulous colors and shapes.