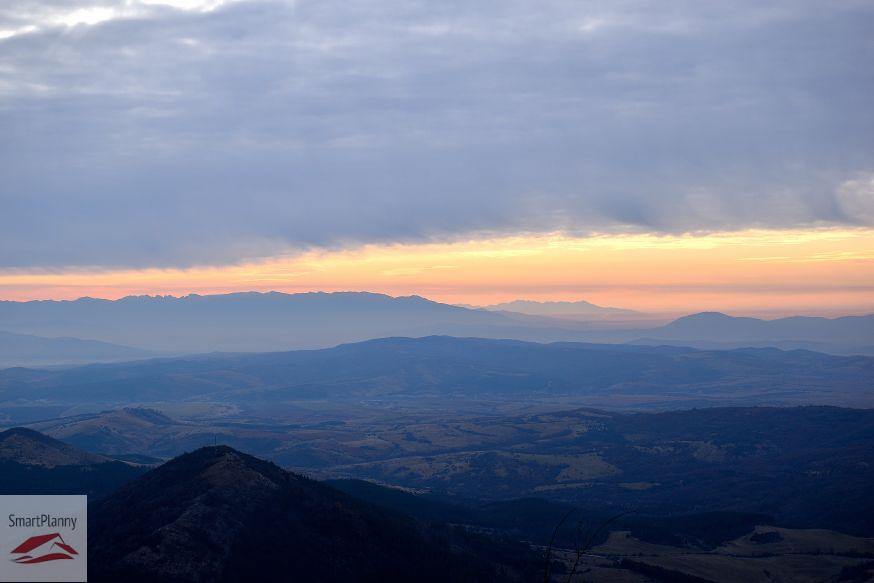 It is part of the Ruisko-Verilska mountain, part of Kraishte, Pernik region.

How to get to Lyubash peak?

The road to the top is perfectly marked with red markings and you walk with your eyes closed, it is so well organized.

The elevation we climbed was 455 m and for the most part the route was relatively steep.

The starting point is located after the bridge on the river Lyalinska, a tributary of the river Yablanitsa and indicated by a sign.

Shortly after the start, the road splits and the blue markings continue for Paramun or Strazha (the neighboring mountain, which the locals call Paramunska).

We climbed at a slow pace because of the photos to the beautiful area around and all those peaks that were visible.

We also jumped like goats from bush to bush until we filled a bag with rose hips to replenish our tea supplies in the winter.

Features of the route to Lyubash peak

After the rosehip harvest, we entered a pine grove. The sun was still with us, but the clouds were already descending in slow waves across the sky.

After that, we passed through a deciduous forest, in the purple carpet of which shy white mushrooms were hiding.

I couldn’t help but pay attention to the fluffy diaper creeping over us.

Opposite, standing proudly, was Strazha Peak (also called Golemi Vruh) (1389 m). An interesting labyrinth of paths had formed from the clearings on its slope.

We climbed the ridge, from where the village of Lyalintsi could already be seen in the palm of our hand.

Shortly before the peak, we reached a lower hill with a waving Bulgarian tricolor. From here the view around the village of Rebro and the many mountains on the horizon was impressive.

A blue marking appeared below the very top, along which you can descend to the village of Rebro.

On the top of Lyubash

At the very top, the time had stopped. A mosaic of fiery colors in the sky. Meadow strewed with white fluff. Dams glistened with their crystal clear waters. Vitosha, Rila, Pirin waived to us from the horizon.

The Bulgarian flag was flying here as well, a quiet spectator of all this beauty that surrounded us.

The walk to Lyubash peak is a great destination near Sofia, which does not require special organizational training. The relatively easy and well-marked route in combination with the unforgettable panorama make it an attractive place for all amateur tourists.

Other destinations in Pernik district here.