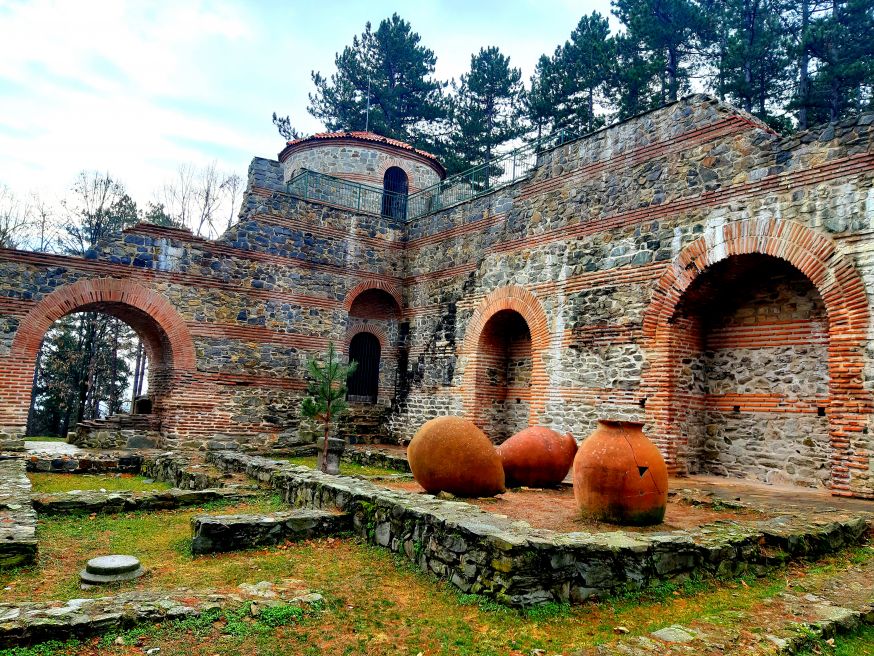 The region of Kyustendil offers interesting destinations of historical, natural and religious nature.

In spite of the gloomy weather and the roaring rain, we visited three in one: the fortress of Hisarlaka, the canyon of the river Shegava and the Zemen Monastery.

Hisarlaka Fortress is located on the highest point of Hisarlaka Park in Kyustendil.

To get to it we passed the zoo in Kyustendil.

The ruins have been restored very successfully.

The lawns were maintained and the place looked very nice to walk back in time.

In the courtyard, we were impressed by several giant ceramic jars.

They were probably used as refrigerators for grain and liquids.

It is believed that the fortress was built in the late IVc, early Vc.

At that time the city was called Velbuzhd.

It was used during the First and Second Bulgarian state and destroyed by the Ottomans in the 15th century.

There were reconstructions and expansions during different periods in Antiquity and the Middle Ages.

The most significant of these are related to the reign of Justinian I.

The fortress has the shape of an irregular polygon and had 14 towers that reached 12 m. height.

Its irregular shape is not typical of the classical type of fortresses but has followed the geography of the terrain.

The canyon of the Shegava River in Kyustendil region

We parked the car at the Church of the Assumption in the village of Rajdavitsa.

From there, after the last houses of the village were finished, we walked on a dirt road for about 20 minutes to the first interestingly shaped rocks in the canyon.

On the steep slopes of the canyon, nature has poured bizarre rock formations with a height of more than 100 m.

We noticed some of their entrances in the distance.

Unfortunately, there was a lack of preliminary information and signs on the spot about what it was, so we could only guess from the shapes whether we had found the attractions mentioned above.

For logistical and meteorological reasons, we could not spend more time on the canyon, but I would definitely come here again to look at the interesting rock phenomenon in more detail.

The Zemen Monastery is located near the town of Zemen.

I admit that I had not researched anything about the monastery, but on the spot it turned out that the lady who sold the tickets was also a guide.

So we were able to find out more about the temple.

The most impressive is the oldest building of the monastery: the church, which is a cultural monument.

From an architectural perspective, it occupies a special place in the Balkans as a representative of cross-domed architecture.

For the uninitiated like me, it means a cross inscribed in a square.

It is when passing from the door to the altar that such an inscribed cross is formed in a square.

The church dates from the 11th century.

The only surviving image from the creation of the temple is of St. Ana.

The altar is a massive stone monolith.

According to legend, if a person puts his left hand on it and wishes for something, it will surely come true.

The floor mosaic is made of multicolored stone slabs and antique bricks.

The popularity of the site is due to the unusual frescoes, which did not follow the canon in the medieval painting of the Second Bulgarian State.

They were alive and realistic.

The most famous are the portraits of a local feudal lord and his wife.

They are one of the earliest portraits of Bulgarian boyars and with the greatest artistic value after the images of Kaloyan and Desislava from the Boyana Church.

The area around Kyustendil is definitely an intriguing destination with numerous traces of history, interesting natural resources and its unusual religious heritage.

Nearby destinations to visit in Pernik region: here