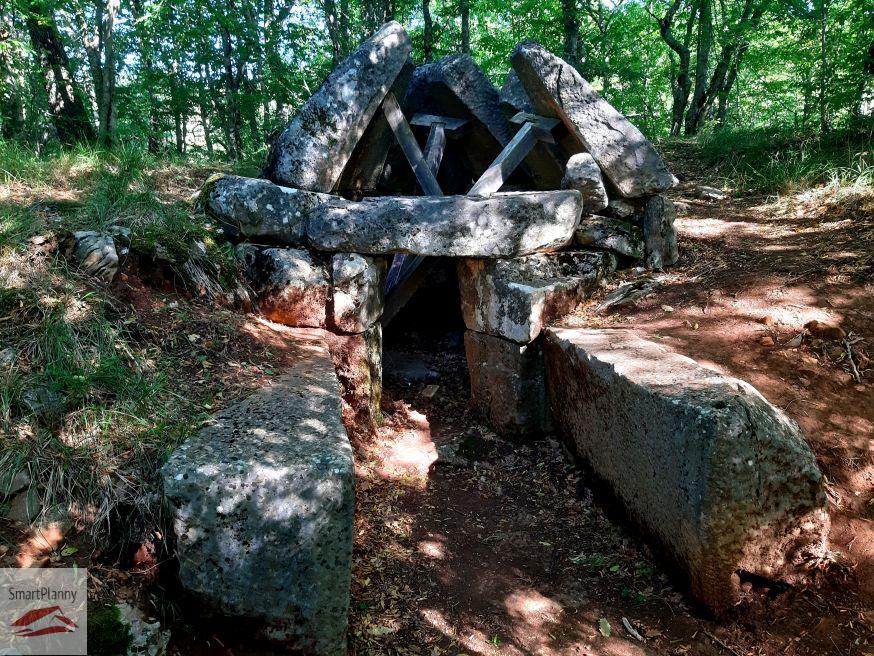 An interesting destination in the region of Malko Tarnovo is the mysterious necropolis of the dead Propada on the outskirts of the city.

The cult complex is located 3 km from Malko Tarnovo. More than 50 tombs have been found in it, among which several tombs can be seen today.

It is a wonderful example of Thracian cult architecture, used as a city of the dead in Roman times.

The necropolis surprises with the area and the different types of architecture in it.

The name Propada comes from the mines that were typical of this region and where often the soil has collapsed over them.

Propada – how to get there?

There are 2 roads that lead from Malko Tarnovo to the cult necropolis.

Follow the one where at the exit of the city there is a sharp turn to the right to a narrower local road.

The local road turns into a narrow asphalt road in worse condition.

Here we were looking for a barely noticeable white sign with a blue marking on the right, just before the end of the road.

This was an indicator that we are on the right track!

It took us about half an hour to see the whole complex.

Propada – the beginning of the complex

We walked on a light and pleasant forest path, which turned out to be an ancient Thracian road.

To complete the mystique, it was very quiet and there were no forest sounds.

We passed an information board marking the beginning of the complex itself.

In the deciduous forest after that, we saw the first shale graves.

Ordinary people were buried in them.

Unfortunately, the treasure hunters have gone wild here as well and left a lot to the imagination.

We also reached a Roman tomb from the 2nd-4th century AD, to the right of the forest path.

It is characterized by the presence of a dromos (corridor), two triangular gables at the front and rear, a single-chamber rectangular burial chamber, and a gabled roof.

There were many scattered marble blocks around it, which may have been part of the tomb.

Here you may think that this is the most significant part of the necropolis, but in fact the path continues up and there is no sign that the interesting is yet to come.

Again to the right of the path we came across a second tomb, again newer than the Roman era.

Curious was the fact that it was carved into the rock available on the ground.

It was in much worse condition, with only two stone blocks at the entrance.

After 5 minutes of walking, we passed through a meadow, then we reached an iron gate and saw the culmination of the necropolis – the tent tomb.

It dates from 5 -3 BC and resembles the architecture of the tomb in Mishkova niva.

The remoteness of the tomb testifies that a prominent Thracian aristocrat was buried in it.

It is unique for the Thracian burial architecture with its megalithic construction.

6 trapezoidal slabs were perfectly supported next to each other, without masonry and without a binder. Today one plate is missing.

There were complex auxiliaries to help recreate the six-walled pyramid.

In the historical museum in Malko Tarnovo, we saw a model of the tomb and the pediment that decorated its dromos.

The mysterious Propada necropolis is a must stop when exploring the region around Strandzha.

At first glance, it seems an unusual destination, but in fact, it is extremely curious to touch the cult rituals of several historical epochs that have left their ancient ruins to this day.