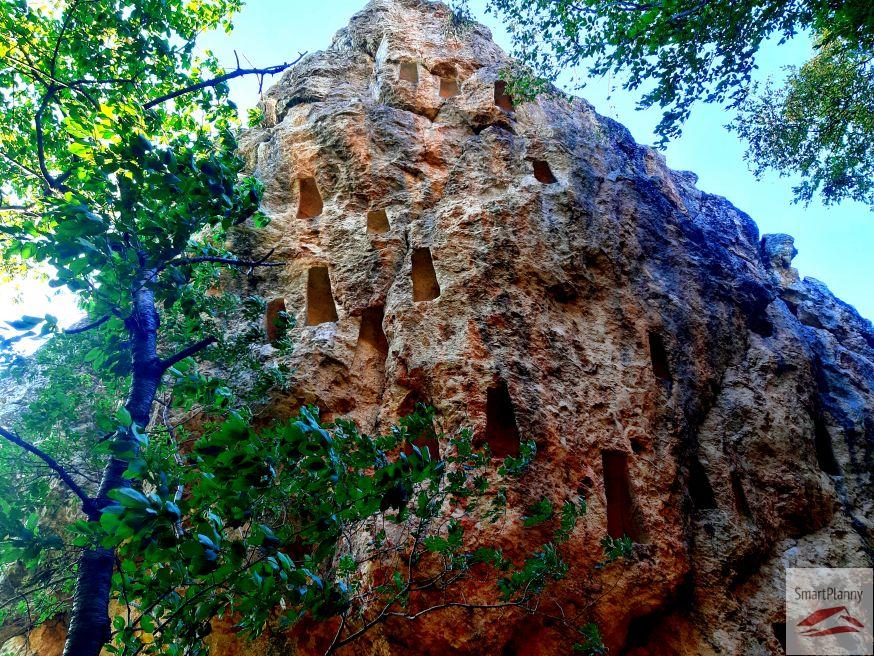 Two interesting sites related to the cult activity of the Thracians are the huge rock complex Deaf Stones in the Eastern Rhodopes and the Menchir Chuchul Stone in Western Sakar.

The Deaf Stones rock complex is located in the Eastern Rhodopes.
It is a complex cult sanctuary with a centuries-old history dating from the XII-VI century BC.

At the top are the remains of a medieval fortress known as Ephraim.

They are called the Deaf Stones because of the impressive rocks, between which there is no echo.

They are located on 4 rock groups, separated by faults.

The Deaf Stones are amazing with the numerous rock niches (over 200!)

Most are trapezoidal, but there are other forms.

One of the hypotheses is that in them the Thracian Odrysians placed urns with the dust of the dead.

Another statement is that young men of military age carved niches and left gifts in them to the gods.

Numerous traces of ancient Thracian rituals have been found around the highest rock.

The end of the complex occurred at the beginning of the 8th century with the advent of the Crusaders, who destroyed the monastery.

The Deaf Stones – the path

The path next to it is light and well marked. You can even drive almost half the distance on a dirt road.

At the turnoff from the road from the village of Malko Gradishte to Ivaylovgrad there is an information board and a gazebo.

We took a good look at the map of the sanctuary.

There are a lot of discovered sites and apparently such ones in progress because we came across two archeological groups digging in different places.

The first rock from the Thracian sanctuary The Deaf Stones is interesting with the numerous rock cavities and a large niche at the foot.

Unfortunately, malicious hands have desecrated the place of worship.

In the central part of the niche, on the ground, we saw the mysterious sign – a petroglyph.

It resembles an engraving with a solar symbol depicting a ship carrying the sun.

There is also a small sign on a tree nearby pointing to the symbol in case you can’t find it.

How the Thracians climbed the high cliffs and what they used the mysterious trapezoidal niches for, remains a mystery today.

To the left of the first rock, we followed a sign to the labyrinth and the cave.

There was a short descent, with a large displacement, where we slipped between rocks and screes.

We reached a new stone group.

Here we looked at the interesting vision of the rocks where the niches are cut.

Cornices of holes decorated the Deaf Stones like surreal garlands.

Following the red arrows, we came to a small cave and a wooden staircase that invited us to explore it.

In the cave, we met her host – a bat, who greeted us with a flight on entry and exit.

We slipped in and out into a small open space clad in moss.

From there we climbed to the top of the cliff and admired the wonderful view of the surrounding region.

After studying this deviation well, we went back to the petroglyph rock.

We continued on the arrows and came across a new cult place.

The rocks closed a site here, at the bottom of which there was again something like a cavity – a cave.

The new element, in addition to the trapezoidal niches, was the many propped wooden sticks on the rocks, which gave a slightly ghostly effect.

A huge round rock towered scary over the cavity.

The Deaf Stones – the highest rock

We continued forward and on the left we saw the sign for the culmination – the main rock, which rises above the whole massif.

It was exciting to see here the remains of a fortress wall, which archaeologists were currently digging in a huge ditch and cleaning.

Many small objects were set aside and grouped in piles.

The rock complex played such a significant role in antiquity that when the Christian religion was adopted, a Christian temple was built on the site.

In front of the main rock, there were ruins of an early Christian and medieval church, dating from 5-6c.

We looked carefully at the two semicircular niches at the base of the rock.

In the larger one, a prominent Thracian aristocrat is supposed to be buried.

It was used as a baptistery (baptistery) in the later period of Christianity.

The second niche has been started and remains unfinished.

The room is rectangular and there were many icons and candles left here.

We climbed the steep stairs to the top of the cult rock.

In ancient times, it was believed that a religious procession passed through them and the priests performed their mysterious rituals on top.

We saw the cistern – а rectangular pool, now without water, and overgrown with grass.

It was probably used to collect and store rainwater. Several gutters led to it.

We stayed at the top for a while and sealed with our senses the beautiful views of the surrounding Rhodopes and Ivaylovgrad Dam.

One thing is clear, it will come again. So many objects remained undiscovered here!

Menhir stone Chuchul is a menhir, located on the outskirts of the village of Ovcharovo, Harmanli municipality.

It is believed to have been used by the Thracians in fertility rituals in different seasons.

According to some sources, the name of the stone comes from Turkish (as “chuchuk” means “boy”).

It is a roughly shaped column in the shape of a phallus with a height of 2.10 m.

This type of cult sites belongs to the so-called megaliths, which for Bulgaria date back to the Early Iron Age (XII-VI centuries BC) and are associated with the Thracians.

It is believed that other menhirs existed in this region, but only this one has survived to this day.

In later years, people’s gatherings were held around it.

It used to be in another place in the village, but it was moved because of the construction of the road.

The directions of the world are marked in red on it.

Menhirs could generally be found alone as monoliths or as part of a group of similar stones.

They were usually elongated stones up to 20 meters high.

Another interesting destination in the region of Sakar are Nachovi Chairi and Paleokastro.