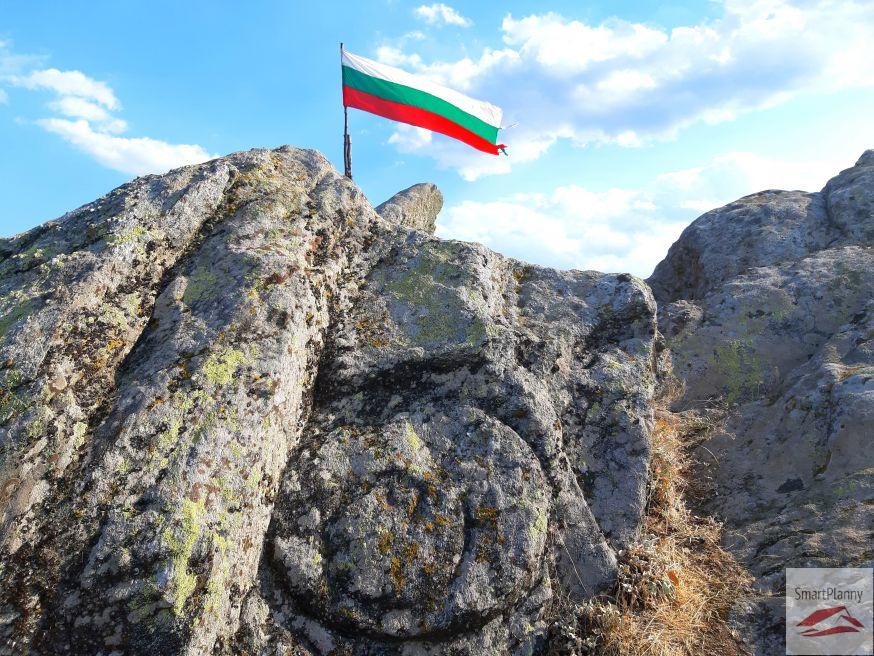 I share my impressions of two amazing sites in Sakar Mountain (near Topolovgrad) – the Nachevi Chairi dolmen and the Paleokastro rock sanctuary.

They are relatively close to each other and it is convenient to group them at once with one visit.

These are impressive representatives of the Thracian rituals and will take you back to the era of priests and their mysterious rituals.

Briefly about the dolmens

Dolmens in Bulgaria are distributed mainly in Southeastern Thrace, and their concentration is highest in Sakar, Strandzha, and the Eastern Rhodopes.

This is the oldest cult tomb architecture known in the Balkans and revered in ancient Thrace between the middle of the II and I millennium BC.

The impressive 600 dolmens are described in Sakar, most of them around the village of Hlyabovo.

Regardless of their grouping – single or in a necropolis, they were covered with an embankment, and their entrances were oriented in one of the directions and never to the north.

In the past, they were called by locals “dragon holes, houses or shutters“

In modern times, almost all dolmens are very destroyed or have disappeared.

The reasons for their poor condition were most likely the use of stone material, their location in the arable land, and people looking for treasures.

The stone material for many wells, bridges, fences in the villages of Strandzha, in whose lands there are dolmens, was extracted from the megaliths.

One of the most representative and easily accessible megaliths, the Nachovi Chairi dolmen, is located on the land of the village of Hlyabovo, Haskovo region.

There are a turnoff and a sign, so you can easily find your way around. From it follows a short path to the landmark.

The Nachevi Chairi dolmen is two-chambered and extremely specific with its attached second dolmen. This is rare with this type of structure.

The small dolmen is the first in which relatively preserved burial remains have been found.

I couldn’t wait and slipped through the two arches to reach the innermost part of the dolmen.

The feeling inside was quite ghostly.

My heart was pounding with adrenaline that I was on an ancient altar, where a prominent Thracian figure was honored.

In front of the dolmen there was a large site, where cult rituals were most likely performed.

From the discovered stone remains around the dolmen, it is assumed that the composition was larger, but there is no proven hypothesis what other megalithic structure was located nearby.

The house of the sun – Paleokastro

Paleokastro is a cult and energetic place for the Thracians, dedicated to the sun, which is not scientifically proven.

They are a chain of ridges with over 150 solar disks found, connected with Thracian rituals.

Their location allows them to be illuminated by the morning sun.

As a form they are concave, convex, built into each other, single and grouped in several.

At the highest part of the peak there was a fortress, used in the Middle Ages.

From it comes the name Paleokastro: Palaios – old and Castro – fortress, which is named after the cult place.

Paleokastro – how to get there?

The rock sanctuary of the sun is located on Paleokastro peak 424m, in Sakar.

The starting point is a turnoff between Topolovgrad and the village of Hlyabovo, 3 km from the town.

You can leave your car at the information plate or drive it almost 3/4 of the distance to the site on a gravel road.

Take this road, which is closer to the road (there are two).

The road passes two villas, then descends and reaches the foot of a hill, where the landmark is located.

This is the best-marked trail I have walked. The blue and white markings are literally a meter away.

There are two bridges and railings that help to climb the hill.

There are jokes along the route like the Dr. Quartz sign near huge white, perhaps, quartz stones.

In the heart of Paleokastro

We also reached the real part of Paleokastro.

I conditionally divide the cult rocks into 2 large groups with many ridges along them.

In the first group, we saw in the beginning 4 stones resembling camel humps.

An indisputable relief are the marked points with which we could focus on the more important objects in this vast stone kingdom.

From now on, traces of human processing were everywhere.

We also saw three circles grouped on a rock, of course, illuminated by the warm rays of the August sun.

We reached the top of the first group of ridges, crowned with the Bulgarian tricolor.

On the main rock here, it turned out to be crowned with the symbol of the Great Mother Goddess.

Below I made an awkward attempt to mark her silhouette.

Another thing that made a great impression on me were the long row of sharp ridges pointing at the sun.

I constantly had the feeling that I was in a giant spaceship.

To the right of the photo below, you can see the disks again, scattered like abandoned shields on the rocks.

We headed to the second stone group on the very top of Paleokastro on a path along the edge of the rock crown.

At the foot of the massif, we saw the remains of a fortress wall.

Here the solar circles were in a different configuration: carved into each other. All around, like a tiara, were the rays of sharp chukars aimed at the sun.

The panorama from the peaks of both massifs, between which there is a visual connection, was exceptional.

Centuries-old deciduous forests, vast fields, and the exquisite spiral of the road in the valley took our breath away.

Sakar is a more accessible mountain than Strandzha because of the lower hills, which alternate with pastures.

The Nachevi Chairi Dolmen and the House of the Sun – Paleokastro are easy to visit and you can peek behind the curtain of the mysterious Thracian culture.