Croatia » An amazing trip to Croatia for 7 days 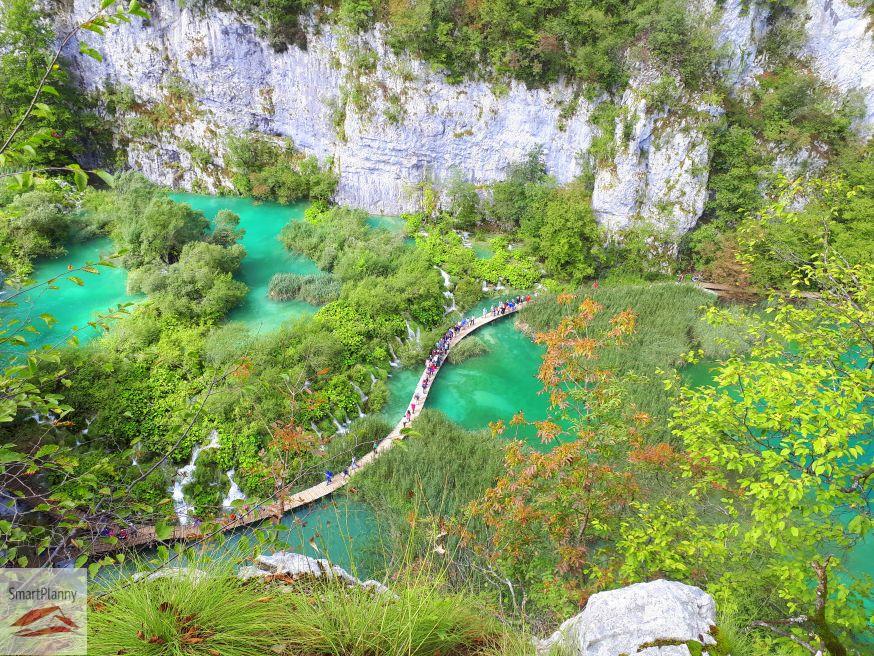 An unforgettable trip to magical Croatia. Cathedrals, Roman cities, the realm of waterfalls, ports, and fortresses – the charm of a magical destination!

We started our unforgettable journey from Zagreb, the capital of Croatia.
The history of the city is mainly marked by rivalry between two cities located on the hills of Gradets and Kaptol, which later merged in Zagreb. They even organized their quarrels on the Bloody Bridge.

Significant for the city is the church of St. Mark. Destroyed after an earthquake, an Austrian architect took part in the renovation, putting the local coats of arms of Croatia and Zagreb on the roof.

The flag of Croatia is interesting: the three lion heads represent the region of Dalmatia. The chessboard is linked to the story when the Croatian king was a prisoner of the Venetian Dodge. He defeated the doge in three games and regained control of Dalmatia. Since then, the Croatian king has placed the chessboard on his coat of arms.Golden star over a black marten, an animal like a weasel is the coat of arms of Slavonia. Now it is called the national currency of the country.

Another famous landmark is the Cathedral of Zagreb in Kaptol (twice damaged by an earthquake).

Here an urban legend tells the story of a young man who made handstands on the church tower. The whole scene looked like a suicide attempt, so firefighters came and rescued the man. To their surprise, the man had no such intentions. He came to Zagreb to become a firefighter but was rejected because he did not have the necessary skills. So he proved them wrong.

We wandered in the square with the statue of Jelalic on horseback (apparently in every European city there is a statue of a horse). He is an important national figure who abolished serfdom in Croatia.

We are captivated by the history of the Lotrsczak Tower, when the Ottoman Empire threatened to conquer Zagreb and there was an Ottoman camp on the other side of the Sava River. One day the cannon of the tower fired at noon in the camp and it hit the rooster that the cook was carrying to the Pasha and destroyed all the tents in the camp. He took this as a bad omen and decided not to attack Zagreb.

We were also impressed by the graffiti with Nikola Tesla, who even today Croatia and Serbia are still arguing about whether he was a Croat or a Serb.

At the end of the day, we tried the delicious Croatian cuisine in the restaurant Vinodol in the city center.

Our next stop was Pula, which I knew had a majestic amphitheater. It turned out to be one of the 6 largest Roman amphitheaters in the world with 4 fully preserved towers.

It is interesting that there were ropes on the whole facility, on which a canopy was stretched. Also, often during the accumulation of huge masses, they sprayed 2 tanks with lavender, because bathing was not a daily habit in those bygone times.

During the city’s Venetian period, the Venetian senate wanted to move the huge facility to Venice. Today, there is a tombstone commemorating the opposition to the plan by Venetian senator Gabriele Emo.

The old town of Pula is very nice and compact. The cobbled streets, the stone buildings, the shops with a cozy atmosphere, the romantic squares. We even found passing through a shop, one of the best-preserved mosaics on the floor of a rich Roman house (12 m x 6 m).

Impressive is the Temple of Augustus, considered one of the two best built Roman temples outside Italy.

For lunch, we ate at the pizzeria Jupiter. We waited a long time while they served us, because of the many guests, but the food was excellent.

The end of the day was climbing a high panoramic place above Pula, where we enjoyed the colorful lights of the quiet city.

Plitvice Lakes are the number one attraction in Croatia.

They are located in a huge national park in the central part of the country and occupy an area of ​​217 ha.

Nature has formed bizarre natural dams in the valley of the Korana River, as a result of which a cascade of 16 layered lakes has been formed. They are divided into Lower (4) and Upper (12).

In the past, the park was inaccessible, until its manager realized his brilliant idea to build a system of bridges and make it accessible to visitors.

The unusual azure color of the water is one of the attractions of the lakes. Moss fossils give a special visual effect. The algae that bloom here emit gases as they grow and decompose, and when they react with water, a stunning azure hue is formed.

Unfortunately, the site is extremely popular and we were in a crowd all the time. There was no time for solitude and enjoyment of the fabulous nature because a line of people was coming after you.

You need to carefully plan your route because there are several entrances, different in duration and complexity routes combined with different vehicles.

Curiously, the impressive lake ecosystem is extremely dynamic and its shapes are constantly changing.

In addition to the many waterfalls and caves, the park is rich in extremely diverse flora and fauna.

At the end, we finished the tour with a magnificent view of the Veliki Slap (Great Waterfall), against which the people looked like little ants.

Zadar is the fifth-largest city in the country and during the Roman period was a typical Roman city with a large square (forum) and a capitol with a temple.

One of the interesting sights is the Land Gate, the most impressive of the 4 leading to the fortified old town. Located near the port, it is decorated with a giant lion with wings, a symbol of the Venetian rule of the city.

A place with a special charge is the Roman Forum of the city – the largest of its kind in Croatia. It is curious how the scattered Roman ruins of the square have become part of modern urbanism. Children jumped from the dignified antique stones, mothers with prams sat on them, companies with young people were gathered in groups.

The silhouette of the square is dominated by the medieval church of St. Donatus and the Cathedral of Zadar with a bell tower next to it.

For dinner, we tried from the sea menu of the restaurant Restoran Zadar – Jadera with an unforgettable view of the impressive romantic Gothic architecture.

On the way to Split, we visited the beach near the town with an exotic name Sibenik (Sibenik). Here we have already set foot on the tour – locations of Game of Thrones, as the magnificent old town with exquisite Renaissance details fit perfectly as the decor of the film.

We spent more time in Split because of the remarkable Diocletian’s Palace and the interesting sights in and around the city.

The palace occupies nearly half of the old town and with its massive size resembles a huge fortress. It was here that the Roman emperor Diocletian planned to retire. Today, many of the most iconic buildings have been restored, making it one of the best-preserved Roman examples of palaces.

One of the most impressive buildings for me was the Vestibule (Rotunda or Atrium), connecting the entrance with the imperial apartments. Foreign ambassadors gathered there and through the divine architecture touching the heavens they prepared for a meeting with God’s chosen ones.

The pulsating heart of Split is the Peristyle, a courtyard surrounded by columns, the mausoleum of Diocletian, the Cathedral of St. Domnius, and the Temple of Jupiter.

At this place, it is not difficult to imagine the emperor entering his court with all his golden attire before the kneeling citizens. The glittering plates also created the illusion of his connection with the divine.

Day 6 In the vicinity of Split

The next destination was the medieval fortress of Klis, half an hour from Split. Due to its strategic position, it played a key role in defending Dalmatia against the Ottoman Empire.

Sites on different levels, towers, battlements, observation posts, and cannons, its overall structure is asymmetrical, following the height topography of the terrain.

Apart from the breathtaking views around, the place impressed us with the realistic combat and defense accessories and architecture, which is very well preserved. It was one of the first goals that all the invaders of these lands set for themselves and has repeatedly passed from locals into foreign hands and vice versa.

In the afternoon we returned to Split to see Marian Park, another symbol of the city.

We conquered its highest place – Mount Telegrin with a proudly waving Croatian flag and apocalyptic views of the surrounding area. This is proven to be the best place in the city for a view of the old town and the port.

Next to the central part of the city, I understood why the locals call the place “the lungs of the city”.

On the way down from the park back to the city we saw a romantic rock church St. Jerome and fantastic little oases from the blue coast of the city.

Another delicious end to the day at Fife, where we stubbornly got seats and were stunned by the express service.

A grand finale in Dubrovnik – the pearl of the Adriatic. One of the most memorable destinations in the Mediterranean and part of the UNESCO World Heritage Site.

The city remained in our minds with its romantic cobbled streets, the impressive old town, the massive fortress walls, and its magnificently preserved historical and religious buildings with the baroque, renaissance, and gothic architecture.

Its boom and prosperity as a sophisticated independent state in the past was due to maritime trade and distinguished diplomacy.

We did not miss a walk along the vast fortress walls, contemplating the splendor of the Adriatic Sea and of course the cult locations of movie scenes in many places in the city.

So many reasons to return to Croatia again and quench our passion for authentic cultural heritage and beautiful nature. This is the place where you can feel the splash of emerald waters in the shadow of epic ancient cities.

Idea for an interesting route in Italy: here