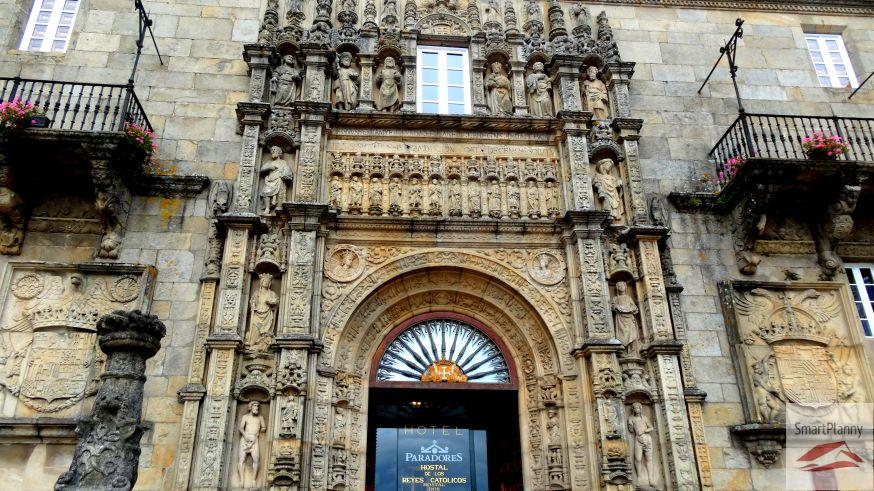 In this article, I will tell you about our first Camino – Camino Portugues, although we passed only its Spanish part.

Preparation, phases, places to sleep and eat, first impressions of the Road – all below here.

The idea for Camino Portuguese came from our friends who had gone to a presentation of the Camino and there they had learned that this destination is very picturesque and not as popular as the Camino Francés.

The planning took a long time because we were a relatively large group of 6 + 2 people. Two friends joined only for the more touristy part of the trip to Lisbon and Porto. I will tell you about this part of the adventure separately.

In general, there are rarely large groups of enthusiasts on the Road. I explain it to myself with the different interests, sports form and pace of the participants.

In the year we did it, there were no direct flights to Lisbon and this made logistics even more difficult.

We started the road on the border between Spain and Portugal. We spent the night in Valenca (Portugal) and the plan was to cross the bridge over the Minho river in the morning and start the Road from Tui (Spain).

There was a funny moment in the style of Lost in translation, when the receptionist in the Portuguese hotel took us to the rooms and called us: Duesh, duesh… and we were dying of laughter from the sound, having no idea what she was telling us.

I had prepared myself with a hundred basic Spanish words, mostly from gastronomy, in order not to starve in the depths of the Spanish countryside, but they obviously didn’t help us here.

As a good strategist, I had provided the group with pilgrim passports for stamps from Lisbon Cathedral.

I had remembered at the last moment that there is a 1-hour difference between the two countries, which turned out to be a key moment for catching the bus with which to shorten the distance and start the journey practically from Redondela.

My “favorite” part of the organization is the search for village bus stops on the net. How many maps I rotated until I found our stop and its schedule, only I know.

I want to say at the beginning that this part of planning the kilometers per day is a bit of a foggy job.

The various sites and Google give one thing, but in reality it turns out quite another. Usually the Road goes around the villages, so you can admire the landscape from everywhere, the famous yellow arrows do not necessarily lead you on the shortest path.

We have walked with more than 10 km in some stages. Sometimes this happened due to a lack of arrows (don’t think that we got lost just like that!).
How the pilgrims walk these kilometers set at the navigation sites, I never understood. We always did a lot more mileage.

In the first kilometers, we saw a stall from where we got another important Camino symbol – the shells. We hung them proudly on our backpacks and walked like battle-hardened pilgrims.

At this stage, our attention was drawn to medieval buildings in the picturesque Spanish villages. Later we found out that these are grain silos, which gave a special old-fashioned color to the Way.

The arrows were everywhere, sometimes quite concentrated (there are 5 in the picture below).

Perhaps the most picturesque part of the route was the medieval bridge in Arcade – Puente Sampaio Bridge.

Today was the day we received an insight into our route next year. Walking next to two Italians, they told us that in Italy they have their Camino – Via Francigena, which is also very beautiful and not as popular as in Spain.

Enthusiastic about the idea, we eagerly began to think about the next Way.

The last part before Pontevedra literally exhausted us. The path wound along a small river in a forest, and it wound and wound, there was no end. Maybe we were too tired because of getting up early and the emotions from the first day.

With last efforts, we checked-in at the Hotel Don Pepe, which I recommend. Clean and comfortable, with a wonderful view of the river.

Why a hotel and not an albergue, you will ask?

When organizing the trip, I decided to plan it a bit more comfortably, to sleep in hotels and airbnbs, and not in the typical Camino hostels (albergues). My idea was that we would be very tired and we would not be able to sleep in a room with 12 other people.

The final touch for the day with the Roman Gothic cathedral in Pontevedra.

This is the day we temporarily lost two members of the group due to huge calluses. They had to catch the bus and wait for us in Caldas. This is a part of life and suffering on the Way!

The other thing we marked the day with was the torrential rain for most of the day and the marker of the fiftieth kilometer, which we were very happy about, knowing that we were halfway to the end.

Very pleasing to the eye were the vineyards along the road with a medieval cross rising mystically above them.

The other feature of our Camino Travels is that they are gourmet trips. We walk from pub to pub, heading for the next mug of beer.

Apart from getting to know the tastes of beer in the different regions of Galicia, this specificity gives a serious push to our motivation to complete the challenge.

The closer we got to Santiago de Compostela, the more pilgrims along the way.

In sweet talks and meeting people of different nationalities, the Way went smoothly and imperceptibly.

Hola, hola …. it turned out to be the second most popular Camino!

The landscape today was quite agrarian, with pretty green fields on both sides of the road and a church for splendor.

The day of the grand finale!

Today the group is divided into two factions.

One (mainly because of the calluses) chose to walk on an asphalt road and save the kilometers around the villages.

The other, giving up on nothing, walked steadfastly on the arrows and presented us with dignity to the Camino community on the Road.

The surroundings were very reminiscent of the previous days: vineyards, churches, and arable yards.

We stayed at Catedral Suites Santiago, a wonderful vintage apartment where we could feel the spirit of the city and the Road.

The Cathedral of Santiago de Compostela is one of three in the world built around the tomb of an apostle, in this case, St. James.

The cathedral symbolizes the end of the Way and a kind of cult place with a special meaning for all pilgrims around the world.

Over the years, due to the growing interest in it, it was turned into an archiepiscopal cathedral, renovated and expanded many times (as when we visited it).

The final of the Camino Portugues

The surprise at the end of the Way for our tired legs was that we had to wait in line for 3 hours for a pilgrimage certificate.

In reality, Santiago is a meeting point for all pilgrimage routes, and they are not one and two. People who usually leave early, walk about 20-25 kilometers and arrive at about the same time.

It turned out to be pure luck that I, as the planner of the group, came across the most ambitious administrator of the certificate desk.

After showering me with questions about the journey we had taken and I took my scroll, it turned out that my comrades had watched my interrogation with concern because they had no idea and no memory of where I had led them.

Infinitely happy, exalted by the achieved goal, full of emotion because of the colorful pilgrimage world around us, we happily finished the end of this journey with the traditional drink from the region!